MINNEAPOLIS (FOX 9) - It was Memorial Day, right in the middle of a 2020 many would like to forget, that 46-year-old George Floyd died in Minneapolis police custody at the intersection of 38th Street and Chicago Avenue South in Minneapolis.

A video taken by a bystander went viral after it showed one of the police officers, later identified as Derek Chauvin, kneeling on Floyd’s neck for nearly nine minutes as Floyd repeatedly cried out, “I can’t breathe.”

Bystanders were seen pleading with the officers to check on Floyd after he appeared to lose consciousness, but none of the officers moved from their positions. Floyd was pronounced dead at the hospital a short time later. 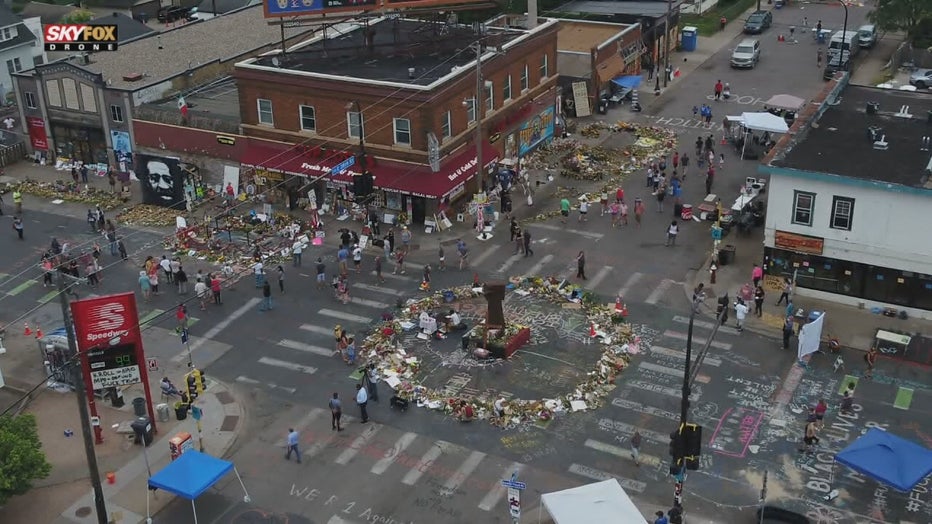 A aerial view of the memorial to George Floyd at 38th and Chicago in Minneapolis. (FOX 9)

Floyd’s death sparked protests over racial justice nationwide and led to calls to defund and dismantle the Minneapolis Police Department.

The four officers involved in Floyd’s killing were fired from police department eventually charged. A highly anticipated pre-trial hearing for the four ex-officers is set to take place on Friday, Sept. 11.

Officers Thomas Lane and J. Alexander Kueng responded to a report of a forgery in progress at Cup Foods at the intersection of 38th Street and Chicago Avenue South around 8:30 p.m. When they arrived, they encountered Floyd, identified as a suspect, in his car. The officers ordered Floyd out of the vehicle and handcuffed him.

The officers told Floyd they were arresting him for passing a $20 counterfeit bill. They walked him to their squad car, but Floyd would not get inside, telling the officers he was claustrophobic.

Chauvin and Thao eventually arrived on the scene to assist. As the officers were trying to force Floyd into the backseat of the squad car, he repeatedly said that he could not breathe and would not go voluntarily into the vehicle.

Chauvin pulled Floyd out of the squad car and he went down on the ground, still handcuffed. Kueng held his back and Lane held his legs while Chauvin pressed his knee onto Floyd’s neck for nearly nine minutes while he repeatedly cried “I can’t breathe.”

Floyd eventually lost consciousness, but none of the officers moved from their positions. The ambulance arrived minutes later. Floyd was later declared dead at the hospital.

Minneapolis city leaders responded to the death of George Floyd in police custody.

The names of all four Minneapolis Police officers involved in the arrest that lead to the death of George Floyd are released. They are Derek Chauvin, Thomas Lane, Tou Thao and J. Alexander Kueng.

Derek Chauvin is arrested and charged with third-degree murder and manslaughter. Hennepin County Attorney Mike Freeman says, “This is by far the fastest we’ve ever charged a police officer.”

Four former Minneapolis Police officers were taken into custody after being charged for their roles in the death of George Floyd.

George Floyd’s memorial service is held at North Central University in Minneapolis. It was a star-studded event capped off by an 8 minute, 46-second moment of silence.

The Hennepin County Medical Examiner's report ruled the death of George Floyd a homicide. The updated report stated that George Floyd experienced a cardiopulmonary arrest while being restrained by law enforcement officer(s).

A new 911 call transcript shows a 911 dispatcher called a Minneapolis Police sergeant over her concern of the way officers were handling the deadly arrest of George Floyd Memorial Day night.

A 911 dispatcher concerned over what she was seeing in the arrest of George Floyd called a Minneapolis Police sergeant to tell him what she saw.

All four former officers appear in Hennepin County District Court for an omnibus hearing in which Judge Peter Cahill set a trial date for next year and warned public officials to stop talking about the case publicly.

The attorney for Thomas Lane files a motion to dismiss the charges against him, arguing there is not enough evidence to establish probable cause the former rookie officer committed a crime.

Lane and J. Alexander Kueng’s body-worn cameras, transcripts of the body camera videos and photos of the interior of George Floyd’s vehicle were all submitted as exhibits supporting the motion.

Judge Peter Cahill issues a gag order in the cases against all four former officers after at least two attorneys talked to the media.

Judge Peter Cahill allows the media and public to view the footage from the body-worn cameras of former officers Thomas Lane and J. Alexander Kueng. The videos were available to view by appointment only and reporters were not allowed to record or share the body camera videos.

A Hennepin County judge allowed the media to view footage Wednesday from the body-worn cameras of two of the former Minneapolis police officers charged in the death of George Floyd.

On the same day, George Floyd’s family files a federal civil rights wrongful death lawsuit against the City of Minneapolis and its police officers.

Judge Peter Cahill dismisses the gag order after the defense argued it was not fair to the four former officers after so much had already been said about their actions. He also decided not to sanction Attorney General Keith Ellison, who the defense said violated the now-dismissed gag order about the case when he sent out a news release to the public introducing his full prosecutorial team.

The attorney for Tou Thao files a motion to dismiss the charges against him, arguing there is not enough evidence to establish probable cause.

Judge Peter Cahill orders the body-worn camera footage from fired officers Thomas Lane and J. Alexander to be released to the public.

The body-worn camera videos from former officers Thomas Lane and J. Alexander Kueng are released to the public. In the videos, Floyd appears alarmed by having Lane’s gun in his face when the officers approached his driver’s side window. The gun and its positioning appear to set the events in motion as Floyd becomes agitated and upset.

Floyd seems to have worked himself up and complains of breathing issues before going to the ground. The officers seem convinced from the start that he is under the influence of something.

Floyd tells the officers he is claustrophobic. He fights and will not stay in the back seat of the squad car. Eventually, the officers pin him to the ground. The videos show several minutes elapsed between the time officers get off a lifeless Floyd and get him into an ambulance before real life-saving efforts are started.

The State of Minnesota files a motion to join the cases of the four Minneapolis police officers charged in the killing of George Floyd into one prosecution. The move means there would be one trial for all the officers, rather than four separate trials.

The body-worn camera video from former officer Tou Thao is released to the public. The video shows Thao trying to control the crowd while his fellow officers restrained George Floyd during the deadly arrest.

New police body camera video was released Thursday, showing the perspective of former Minneapolis Police Officer Tou Thao as he tried to control the crowd while his fellow officers restrained George Floyd during the deadly arrest.

In the video, Thao is seen talking to bystanders who are growing more agitated by the minute as Floyd cries out while being restrained by then officers Derek Chauvin, J. Alexander Kueng and Thomas Lane.

Video of the Minnesota Bureau of Criminal Apprehension’s interrogation of former officer Tou Thao released. In the video, which lasts nearly two hours, Thao recounts what led up to George Floyd's death and that they went to Cup Foods as backup, saying they know the area to be dangerous.

Thao told the BCA it was his suggestion they put a handcuffed Floyd onto the street after twice failing to put him, panicked and complaining of claustrophobia, into the back of a squad vehicle.

In a new filing supporting the motion to dismiss the charges against Thomas Lane, the former officer’s attorney alleges that George Floyd overdosed on fentanyl while resisting arrest and in doing so contributed to his own death. He points to the disappearance of a white spot on Floyd’s tongue in the body camera video, arguing it looks like “2 milligrams of fentanyl, a lethal dose.”

Attorney for J. Alexander Kueng files a motion to change the venue for the trial.

Defense attorneys for Derek Chauvin files motion to dismiss the charges against the former officer. In the court documents, the attorneys cite a lack of intent to prove the second-degree murder charge, saying the officers were acting to keep George Floyd under control and that Chauvin followed training when taking Floyd into custody.

Chauvin’s attorneys as well as those for Tou Thao also filed a motion asking for the location of the trial to be moved. The attorneys argue an impartial jury cannot be found in Hennepin County.

At the same time, the prosecution filed a court document seeking longer sentences for all four officers charged in Floyd’s death.

The attorney for Thomas Lane files a motion for a change of venue for the trial in the case.

The defense attorneys representing all four officers in the case also file an objection to the state’s motion to join all four cases and hold one trial.

A motions hearing is held in the case. The hearing gives the state and defense attorneys a change to present oral arguments to Hennepin County Judge Peter Cahill about motions they have filed in the case, including the state's motion to join all four cases into one trial and the defense teams' motion to change the venue of the trial.

Cahill does not address the motions to dismiss the charges against the officers. He does not rule on either the state’s motion to join all four cases into one trial nor the defense teams’ motion to change the venue of the trial.

The judge disqualifies Hennepin County Attorney Mike Freeman and three other prosecutors in his office from the case over a private meeting they had with the medical examiner, saying it makes them witnesses.

The hearing is the first time Derek Chauvin appears in court in-person after making his previous appearances over a video feed from the Oak Park Heights prison.