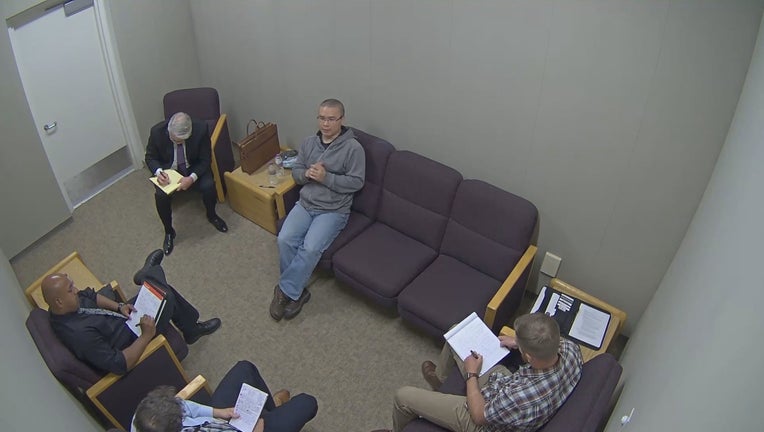 Former Minneapolis police officer Tou Thao is interrogated by investigators with the Minnesota Bureau of Criminal Apprehension in regards to the death of George Floyd. (FOX 9)

MINNEAPOLIS (FOX 9) - One day after the body camera video from former Minneapolis officer Tou Thao was released, his interrogation by the Minnesota Bureau of Criminal Apprehension has been released as well.

Thao told the BCA it was his suggestion they put a handcuffed Floyd onto the street after twice failing to put him, panicked and complaining of claustrophobia, into the back of a squad vehicle.

Though the BCA investigator wondered, what the point of that was to begin with?

BCA investigator: Do you know what the urgency was to get him in the squad car?

Thao said he was concerned about what’s known as “excited delirium,” that Floyd might have been overdosing and at his size, could be dangerous even in handcuffs.

“Potentially very explosive and violent. Um, if drugs in their system, they can kind of have that super human strength,” said Thao in the interview.

Thao says he focused mostly on the growing crowd, who he considered hostile. He saw Derek Chauvin’s knee on Floyd, but paid little attention what Chauvin was doing, or how Floyd was reacting.

“He was saying that he couldn’t breathe, but then he was obviously yelling and talking,” said Thao in the interview.

He said training suggested Floyd could breathe and defended his lack of intervention as a byproduct of his role watching the crowd.

BCA: They were yelling at you and other officers?

Thao: Yeah, they were saying, “Get off him, get off his neck. You know, look at him.”

Thao: Check on him.

BCA: Did you do that?

Thao: That was not my job.

Thao said he trusted the other officers were reacting properly to Floyd’s distress. In hindsight, he should have been more observant, perhaps too focused on guarding the scene.

“Yeah, I don’t want anyone to die,” said Thao in the interview. “I mean, it was kind of a somber moment. Especially for me, my heart kind of sank.”