Residents in the southern Minnesota town are cleaning up after Wednesday night's tornado left damage.

HARTLAND, Minn. (FOX 9) - A line of severe storms brought high winds, severe weather and at least three tornadoes to Minnesota and western Wisconsin Wednesday night. At least one person was killed as a result of the storms.

After hitting a record high temperature Wednesday afternoon, temperatures dropped overnight causing officials to warn drivers about snow melt and rain freezing on roadways for the Thursday morning commute. So far, the Minnesota Department of Transportation’s traffic map has not shown any significant problems in the metro, although high winds and blowing snow are causing some visibility issues in the southwestern part of the state.

Over 75 school districts were closed Thursday or delayed two hours due to the inclement weather. A full list of school closings can be found here.

Download the FOX 9 Weather App to stay up to date on the latest winter weather including has the latest temperatures, snow totals, forecasts and school closings 24/7: fox9.com/apps

An EF0 tornado occurred near Lewiston, Minnesota and an EF2 tornado was confirmed north of Neillsville, Wisconsin, about 50 miles east of Eau Claire, according to NWS.

The NWS office in the Twin Cities confirmed a tornado in Hartland, Minnesota after crews surveyed the damage Thursday.

NWS survey crews are working to confirm whether any additional tornadoes occurred elsewhere in the two states.

A December storm and a possible tornado caused damage to homes and vehicles and downed several trees in Hartland, Minnesota.

The storm damaged a bank, sending parts of the brick roof to the ground. Homes and other buildings in the area were also damaged.

Storms that pushed through on Wednesday rocked parts of southern Minnesota, with strong winds damaging a bank in the small city of Hartland in Freeborn County.

The latest tornado on record in Minnesota had been on November 16, 1931, east of Maple Plain.

Around 8:19 p.m., the National Weather Service reported a tornado in Plainview, Minnesota, northeast of Rochester and not far from the state border with Wisconsin.

Wednesday's storm left a trail of damage in Plainview, Minnesota between Rochester and Winona. It is one of the places where there were reports of a possible tornado.

NWS is also investigating a possible tornado in Stanley, Wisconsin, a town of about 4,000 about 35 miles east of Eau Claire. 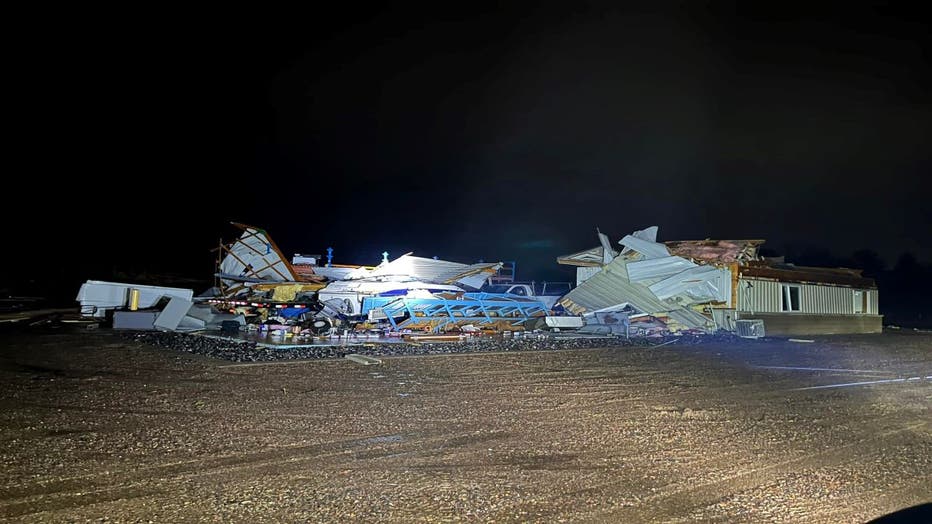 The Stanley Police Department said as about 75% of the town is without power as of Thursday morning. They also ask that residents stay in their homes and do not go out to look at the damage because there are numerous power lines down that may cause injuries.

A 65-year-old man was killed by a falling tree in Haverhill Township near Rochester, according to Lt. Lee Rossman of the Olmstead County Sheriff’s Office. He was outside smoking a cigarette when the tornado sirens went off, witnesses said. The tree fell on the man and his pickup truck

The victim was taken to the hospital, where he died.

The severe line of storms in southern Minnesota from Rochester to Fairmont brought wind gusts of over 70 mph. A strong burst of wind with brief heavy snow hit along the Minnesota River in Redwood Falls, which recorded a peak wind gust of 78 mph. 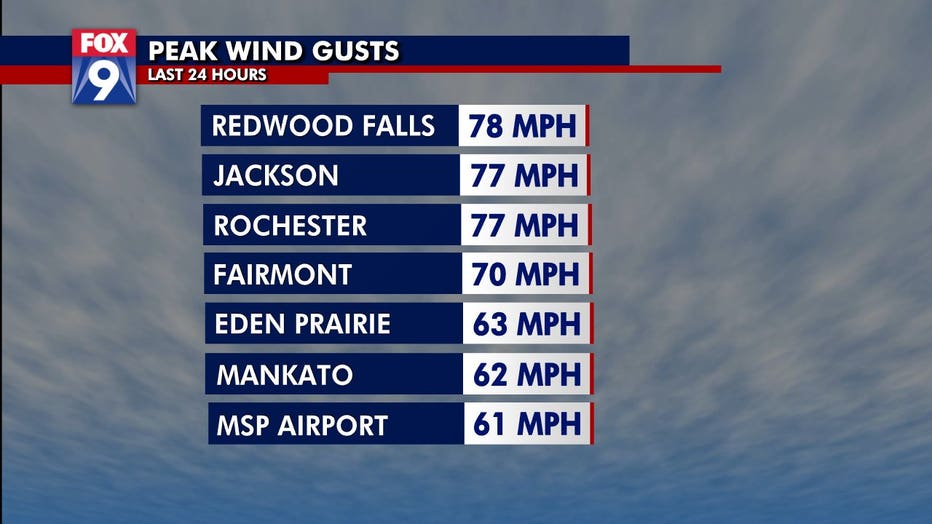 In Red Wing, a video from Bill Hanisch shows an awning being snapped off a building downtown. A witness in Hartland said strong winds pushed through the area, knocking down trees before hitting the bank.

The tornadoes fall on the same day the Twin Cities broke a record high temperature for December, hitting 52 at MSP Airport at 2 p.m. and continuing to climb into the late afternoon and evening. That breaks the record of 51 set in 2014. Snowpack at the airport dropped from 8 inches to just a trace over the course of the day.