In a Wednesday night address, the Governor announced the new order called Stay Safe MN that will open retail stores at 50 percent and allow social gatherings of 10 or fewer people.

(FOX 9) - In a speech Wednesday night, Gov. Tim Walz announced he would let the previous stay-at-home order expire Sunday and replace it with an order allowing for gatherings of friends and family of 10 or fewer people and allowing retail stores to reopen with a maximum capacity of 50 percent.

Walz called the move a "cautious turn of the dial" in his speech. The new order still encourages Minnesotans to stay close to home and directs Minnesotans with serious illnesses and the elderly to continue sheltering at home.

Here is what can and cannot open under the new Stay Safe MN order announced by Gov. Tim Walz Wednesday night. The old order expires Sunday.

"We know the safest place we can be is at home, but we can't continue like this forever," he said.

Along with the announcement of the "Stay Safe MN" order, Walz said he has directed his staff to issue guidance on how restaurants, bars and salons can reopen on June 1. He said more guidance will be made available to those businesses ahead of that date. The Governor said those reopenings will coincide with an increase in testing, tracing and isolating the virus in Minnesota. 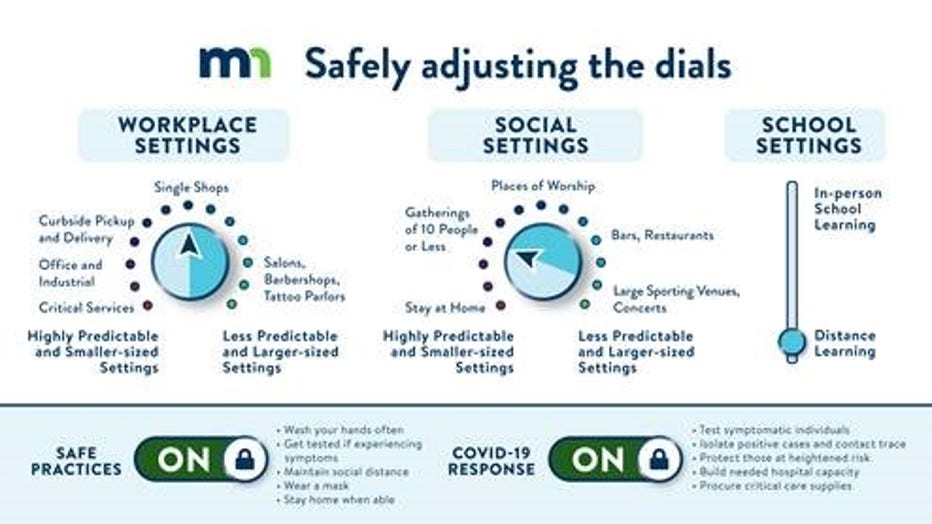 Gov. Tim Walz released a new graphic Wednesday showing his administration's plans for reopening the state during the COVID-19 pandemic.

By allowing retail businesses and malls to reopen to customers, the Minnesota Department of Employment and Economic Development estimates 37,000 more people can return to work next week.

The Governor also extended his peacetime emergency authority until June 12. The peacetime emergency was set to expire Wednesday. By law, the governor has to extend his emergency declaration every 30 days to have the authority to close businesses, order people to shelter at home, and carry out dozens of other executive orders he's signed over the past two months. Lawmakers would have to formally vote to end the emergency, which is unlikely with a divided state Legislature.

Everything you need to know about Minnesota’s new order

Minnesota's new Stay Safe MN order will allow retailers to open at 50 percent capacity and allow for small social gatherings. See how retailers feel and what the Governor said in his speech and announcement Wednesday.

For all Minnesotans, Walz asks:

Hospital heroes: COVID-19 fear eclipsed by the courage we see

April 27: Some non-essential industrial and manufacturing businesses allowed to reopen