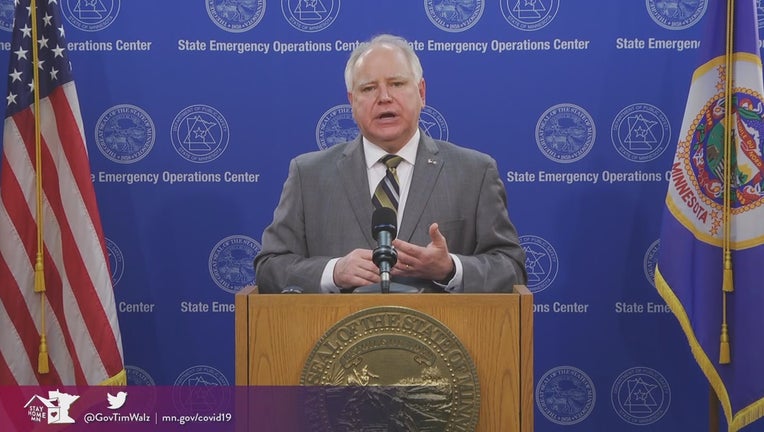 ST. PAUL, Minn. (FOX 9) - Gov. Tim Walz announced Thursday he will extend Minnesota’s stay-at-home order, which was set to expire Monday, until May 18 while allowing some businesses to reopen.

Salons and barbershops will also be allowed to reopen, but only to sell retail products for pick-up and not to provide services.

READ NEXT: What businesses can reopen for curbside pick-up, delivery under Minnesota's revised stay-at-home order

"Under no circumstances can a customer enter a business," Economic Development Commissioner Steve Grove said. "In every place possible, we ask that they remain in their cars." He added that delivery people should not enter a person's home.

Grove said businesses must develop and publicly post a plan for how they can open safely.

Officials estimate the modified order will allow approximated 10,000 businesses to reopen and an estimated 30,000 Minnesotans to go back to work.

With the move, Walz said 82 percent of Minnesota's businesses will be allowed to open by Monday. But the economic pain has been deep: more than 584,000 Minnesotans have filed for unemployment since mid-March, 18.7 percent of the state's workforce.

Large group gatherings, in-person worship, youth sports and camps, large weddings and graduations, and routine dental care will not be allowed to reopen for the time being, Walz said.

Legislative Republicans criticized the governor and said the two-week extension of the stay-home order would be devastating to small businesses.

"The governor is asking the right questions and looking at the right data, but I'm disappointed he's not turning the dial further today," Senate Majority Leader Paul Gazelka, R-East Gull Lake, said in an emailed statement. "I think he should move further, and faster, opening businesses up again in Minnesota."

Told of the GOP reaction, Walz denied that he had shifted the goalposts since issuing his original orders in mid-March. The state's confirmed cases are accelerating as Minnesota slowly increases testing, showing the peak is yet to come.

"Those who are saying we should open up all businesses tomorrow because this is not serious and we overreacted, they are wrong," Walz said.

The governor is also encouraging all Minnesotans to wear a manufactured or homemade mask at all times when they leave their homes to go any place where social distancing is difficult.

Walz emphasized that people should also continue to work from home if they are able.

“If you are already teleworking, keep doing it,” he said.

The stay-at-home order has been in effect since March 27.

Minnesota Gov. Tim Walz said he would outline his next steps to reopen the state on Thursday just days before his stay-home order is set to expire.

April 27: Some non-essential industrial and manufacturing businesses allowed to reopen

A CALL FOR INCREASED TESTING

Throughout the stay-at-home order, Governor Walz has pushed for expanded COVID-19 testing, calling it the key to reopening businesses.

On April 22, the state struck a deal with the University of Minnesota and the Mayo Clinic to increase the testing capacity to 20,000 a day.

As Minnesota expands COVID-19 testing, the state is launching a website for people to find testing locations.

Due to an early test kit shortage, qualifications to get tested were fairly strict, state health leaders now are encouraging health care providers to open up testing to all symptomatic patients. Week-over-week testing numbers are rising, but have fallen short of goals so far.

As of Thursday, Minnesota has reported 5,136 positive COVID-19 cases and 343 deaths.