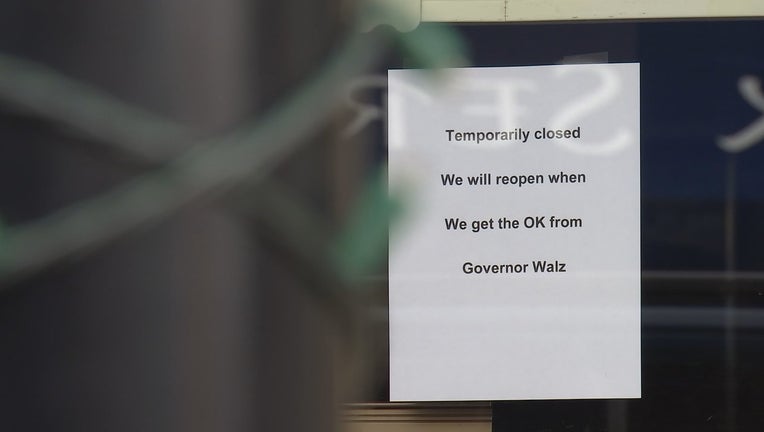 A closed sign hangs in a store front as businesses await the news to reopen from Minnesota Governor Tim Walz. (FOX 9)

ST. PAUL, Minn. (FOX 9) - Minnesota Gov. Tim Walz said he would outline his next steps to reopen the state on Thursday, just days before his stay-home order is set to expire. A 2 p.m. news conference will air live on FOX 9 and streaming at fox9.com/live.

Walz hinted Wednesday that he would allow some small businesses to reopen. He did not provide additional details, leaving business owners in limbo as the current restrictions are only in place through the weekend.

Minnesota Gov. Tim Walz said he would outline his next steps to reopen the state on Thursday just days before his stay-home order is set to expire.

Walz is making his next move as the coronavirus outbreak expands in Minnesota. Confirmed cases accelerated to 463 on Wednesday as the state slowly ramps up testing.

The governor spoke to reporters in Worthington near the JBS pork processing plant, which closed this month after a massive outbreak among workers, Walz said if a pig plant could resume operations after an outbreak, a hardware store could figure out how to sell hammers with just a couple people in the store.

They sued Walz, asking the state Court of Appeals to toss out four of his executive orders. The owners are represented by conservative attorney Erick Kaardal.

"The Executive Orders unconstitutionally pick businesses to be winners and losers during the pandemic instead of treating businesses equally," the business owners wrote in their filing with the court.

The petitioner is Larvita McFarquhar, who owns the Lyndwood Center in Lynd, near Marshall. The facility houses a dance studio, gymnastics studio and a restaurant.

Thousands of businesses have been forced to close for more than a month as Walz took increasing steps starting in mid-March to slow the spread of coronavirus. To date, 319 Minnesotans have died, 78 percent of whom were residents of long-term care facilities.

"The virus has forced the state to take drastic action, but it’s action that is within the governor’s authority," Tschann said in an emailed statement. "It is also in line with federal guidance and very similar to what other states are doing."

Walz's economic development commissioner, Steve Grove, declined to comment about the specifics of the lawsuit but said he was sympathetic to the plight of small businesses in noncritical sectors. Larger retailers, who sell both essential and nonessential items, have been allowed to stay open.

"We get it, why a small business on Main Street isn’t open and they look down to the end of the street and a larger big box store is (open) – that’s challenging," Grove told reporters Wednesday afternoon.

Walz said he would not reopen the economy like a "light switch" because of fears that the outbreak could intensify, requiring a new wave of closures.

But Minnesotans can't shelter in place until there's a vaccine, he said. Such a vaccine is estimated to be more than a year away.

"I think on Main Street, we’re going to have to focus on that, because we will not be able to take much longer," Walz said.