Minneapolis police found a 15-year-old who had been shot after a large disturbance and fights outside of the problematic 1721 University Avenue building.

MINNEAPOLIS (FOX 9) - A 15-year-old boy was found with a gunshot wound to the leg in the backyard of 1721 University Avenue late Friday night. This is the latest crime issue at the problematic address across the street from the University of Minnesota campus.

Minneapolis police officers were called to the scene at about 11:20 p.m. on a report of a large crowd causing a disturbance and fights breaking out. Numerous gunshots were heard in the area as officers were arriving on the scene, which MPD says quickly turned chaotic with people running from the crowd in all directions.

Officers from the 1st, 2nd, 3rd and 5th Precincts responded, along with University of Minnesota Police and air support from the Minnesota State Patrol. 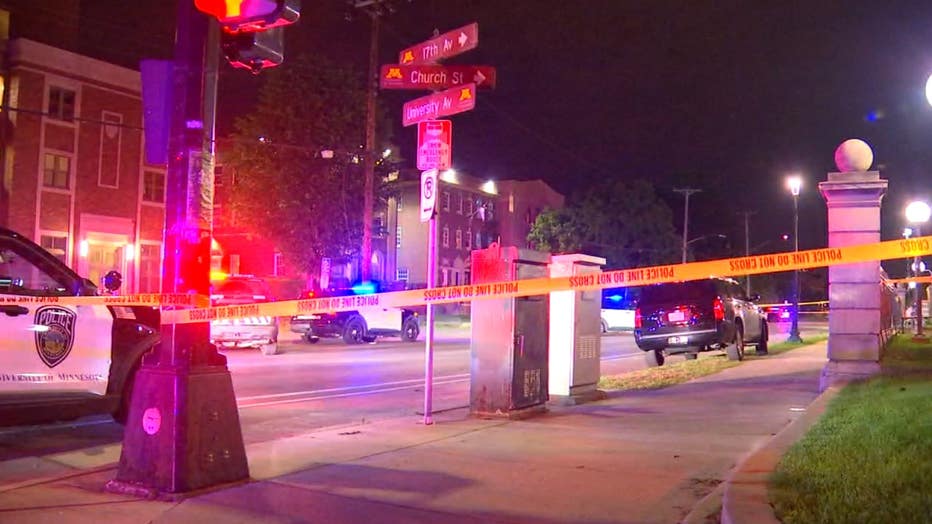 Minneapolis police found a 15-year-old who had been shot after a large disturbance and fights outside of the problematic 1721 University Avenue building. (FOX 9)

The 15-year-old who was shot was taken by ambulance to the hospital.

A vehicle believed to be used by an individual who fired shots was located and towed from the scene. No arrests have been made.

Police responded to a report of shots fired on the 1700 block of University Ave SE last Sunday, May 29. No injuries were reported in that incident.

Minneapolis describe 1721 University Avenue as "a focal point of criminal behavior and large disturbances." The building is now boarded up and formal eviction proceedings are underway.

Reward for tips leading to arrest

Anyone with specific information or video footage concerning criminal behavior at 1721 University is encouraged to call CrimeStoppers at 1-800-222-TIPS (8477).  Tips may be submitted electronically at www.CrimeStoppersMN.org. All Tips are anonymous and persons providing information leading to an arrest and conviction may be eligible for a financial reward.

Since the Spring of 2021, the MPD, University of Minnesota Police Department, City of Minneapolis licensing, permitting, and inspection have been working to address ongoing tenant issues and a rise in crime on the 1700 block of University, specifically centered around 1721 University.

"Efforts continue daily to address the real concerns raised by residents, employees, and students in the area," Officer Garrett Parten said in a statement last week. "These collaborative efforts are being accomplished in accordance with state statutes and city ordinances.

The Minneapolis Police Department and University of Minnesota Police Department are providing extra patrols and other focused police activity on the 1700 block of University. Residents and individuals in the area are encouraged to immediately call 911 when they observe or experience criminal activity. In addition, anyone is able to make anonymous tips about criminal behavior by contacting CrimeStoppers at 1-800-222-TIPS (8477).  Tips may be submitted electronically at www.CrimeStoppersMN.org. All Tips are anonymous.