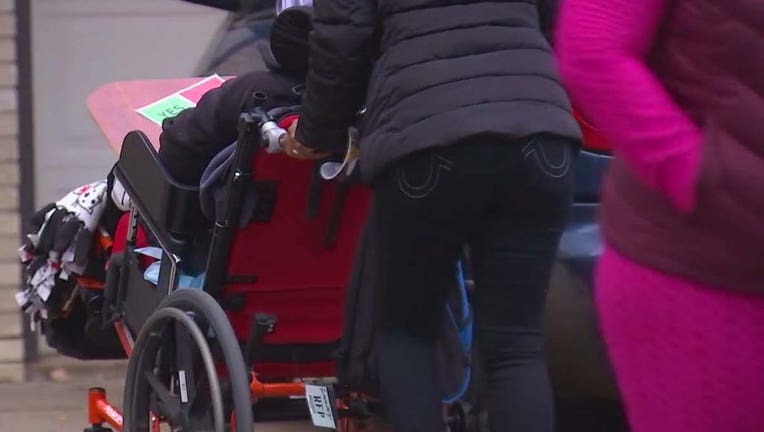 Ladavionne suffered a traumatic brain injury that has left him wheelchair-bound and unable to speak. But with assistance, he is able to attend school in Hopkins.

(FOX 9) - After returning home earlier this month, the recovery is continuing for a boy who was shot in the head last spring in Minneapolis.

It's been nearly seven months since young Ladavionne Garrett, Jr. was shot in the head while riding in a car with his parents in Minneapolis. An innocent victim of the city’s gun violence that has tragically killed and maimed several young kids this year.

While his recovery continues, Ladavionne marked a milestone this past week. Not only is he back home in time for the holidays, but he's also back in school.

"This baby is a miracle child himself and he’s home for the holidays," said Ladavionne's grandmother Sharrie Jennings said.

While waiting for his bus to arrive home, Jennings told FOX 9 she felt blessed. Blessed to still have her grandson and to see how far the now 11-year-old has come since that awful day last April when he was shot in the head.

"When I tell you Junior is amazing, he does different things every day," she said. "Monday, he mouthed out, ‘hi’ to us. And he lifted his head up off the bed and he lifted his right leg up. That’s things that we had never seen before."

After returning home earlier this month, the recovery is continuing for Ladavionne Garrett, Jr., a boy who was shot in the head last spring in Minneapolis.

Jennings asked us not to show the boy’s face for privacy reasons and while he has made tremendous strides to get here, Ladavionne suffered a traumatic brain injury that has left him wheelchair-bound and unable to speak.

But with assistance, he is able to attend school in Hopkins where he receives specialized one-on-one care and plenty of love and support.

"The first day he went to school, they had a big, ole’ banner out there, saying, Welcome Junior," said Jennings. "And they had a little parade going for him. It is magnificent. The teacher is awesome!"

With Thanksgiving right around the corner and Christmas to follow, Ladavionne’s grandmother vowed to make the holidays something special this year.

"We’re going to do it real big for Junior," said Jennings. "It’s a celebration. He’s been in the hospital for six months. This is nothing more than a miracle."

The grandmother of a 10-year-old shooting victim called out her community in an impassioned speech Monday afternoon during a news conference where city leaders unveiled a community policing plan. In her speech, she said the recent violence was unacceptable and questioned why there was no outrage about the shootings.

Jennings is currently raising money to help with Ladavionne’s ongoing care as she reports he needs basic equipment, supplies and access to therapies insurance won’t cover.

She also continues to speak out on the gun violence in the community and the innocent young lives lost, specifically Trinity Ottoson-Smith and Aniya Allen, who were both shot and killed while Ladavionne was in the hospital fighting for his life.

Ladavionne’s loved ones promised they would never stop in their search for justice, not just for Junior, but for Aniya and Trinity. Their shooters remain out there.

Grandmother of Minneapolis child shot in head speaks out: 'This silence is killing our family'

The grandmother of Ladavionne Garrett Jr. spoke out 100 days after the 10-year-old was shot in the head, pleading with someone to come forward with information on who shot her grandson. A combined $180,000 reward is now being offered in the case, as well as the cases of two other children who were shot in Minneapolis in the following weeks.