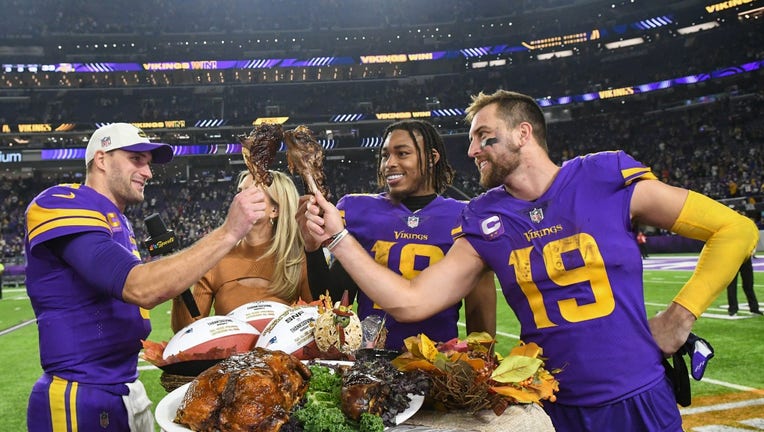 He was asked what the next step is in the post game celebrations after weeks of wearing diamond chains. His answer? Getting a grill. No, not the one we use to cook burgers, steaks and hot dogs during the summer. The kind you put in your mouth that’s filled with diamonds, real or fake, similar to what star receiver Justin Jefferson wears.

Kirk Cousins is in talks with his dentist about getting a grill as the Vikings are 9-2 and on the verge of clinching the team's first NFC North title since 2017.

Cousins said he had an email Friday morning from his dentist back in Holland, Mich., as well as from a half dozen others who were more than willing to offer their services. He says something is "in the works" to be done by the end of the season.

"There’s no lack of effort, no lack of help and resources so we’ll see what we can pull off before the season’s over. I guess I have to say it’s in the works," Cousins said Wednesday. "I emailed him back and said great, I’d love to see them. We’ll see what he can pull off."

The Minnesota Vikings are only in Week 13, but are on the verge of clinching their first NFC North title since 2017.

It’s fun to win, and the Vikings are making the most of every victory they get. They won seven straight after a 24-7 loss at Philadelphia. Cousins wore Christian Darrisaw’s chain home from London. He wore several chains home from at Miami, then was shirtless with chains after a win in Washington. Patrick Peterson took his turn after a dramatic win in Buffalo.

So what will Cousins’ grill look like? Real diamonds or fake? Will he consult a jeweler? It’s a great problem to have.

"Guys, this is not my world, I don’t even know what it takes to make them, I don’t know if fake ones are going to pass as real ones or if I’m going to be spotted a mile away if they’re not the real deal. It’s not a world I’ve lived in for a very long time, but I’m learning," Cousins said.

Not only are the Vikings 9-2, they can clinch the NFC North Division with a win over the New York Jets on Sunday, and a Detroit Lions loss to the Jacksonville Jaguars. It would be their first division title since 2017.

"We put ourself in position to do it, so credit the guys in this locker room and everybody that’s been involved in us getting to this point. Clinching the division is in front of us, but we still gotta go out and compete and win games," running back Dalvin Cook said.

Cousins didn’t expect to be emailing his dentist about grills after the Vikings went 8-9 last season, missing the NFC Playoffs for the second straight year. What followed was the ownership group making changes in the front office, and overhauling the coaching staff. Eight of the Vikings’ nine wins this year have been one-possession games in the fourth quarter, and Cousins has engineered six comeback drives this season.

"I think the humor of it all is it isn’t a conversation I expected to be having. Hopefully we keep winning, hopefully there’s a lot more jewelry up ahead and if this whole thing goes where we’d love for it to go, there’s going to be a lot of jewelry up ahead and probably need to get the real thing," Cousins said.

A GRIDDY COMING FOR KEVIN O’CONNELL?

Even Kevin O’Connell is getting in on the fun this season. Earlier this year, he got slimed at practice after Justin Jefferson was named the Nickelodeon Player of the Week. O’Connell said on a Barstool Sports podcast this week that he told his team if they win a playoff game, he’ll join them in a Griddy dance.

In last Thursday’s win over the Patriots, the entire offense did the Griddy in the end zone after Cousins hit Jefferson for a first quarter touchdown.

"I had a little conversation with some of our guys and Justin a while back about if I would do it, kind of put some parameters on that. We’ve got some work to do if that ends up being a reality," O’Connell said Wednesday. "I’d love to say we can shut the cameras off, but I know around here that’s probably not likely."

O’Connell said rookie defensive back Andrew Booth Jr. had successful surgery to repair a meniscus injury, and is out for the rest of the season. That means the Vikings’ top two 2022 draft picks have suffered season-ending injuries. Safety Lewis Cine suffered a fractured ankle against the Saints in London.

Christian Darrisaw was the only player to not participate in practice Wednesday at TCO Performance Center. O’Connell said he remains in the concussion protocol, and there’s not a timetable for his return.

"We’re ultimately going to be very smart with him. Just make sure as I’ve talked to CD about, we want him feeling great and at full capacity when he’s able to come back. We just want to make sure he’s good," O’Connell said.

Akayleb Evans is progressing out of the concussion protocol and practiced Wednesday, as did Dalvin Tomlinson (calf). Harrison Smith was limited with an ankle injury.