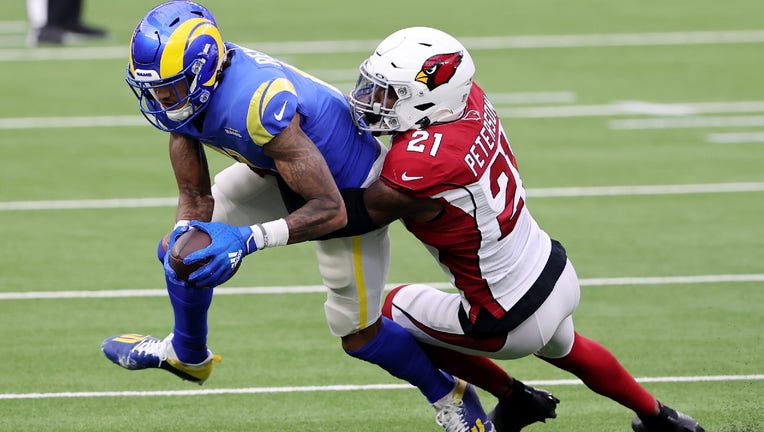 Patrick Peterson #21 of the Arizona Cardinals tackles Josh Reynolds #11 of the Los Angeles Rams during the first half at SoFi Stadium on January 03, 2021 in Inglewood, California. ((Photo by Sean M. Haffey/Getty Images))

MINNEAPOLIS - The Minnesota Vikings have reportedly added one of the better defensive backs in the NFL for the 2021 season as free agency started on Wednesday.

According to Adam Schefter with ESPN, the Vikings reached an agreement on a 1-year deal with veteran defensive back Patrick Peterson. The deal is reportedly worth about $10 million. Peterson comes to the Vikings to provide a veteran presence in the secondary after he spent his first 10 NFL seasons with the Arizona Cardinals.

Peterson is a three-time All-Pro selection at defensive back, and made eight straight Pro Bowls. He had a career-high seven interceptions in 2012. Last year, he finished with 61 tackles, three interceptions and seven pass break-ups. Peterson has made 154 career starts, missing only six games during the 2019 season. He has 28 career interceptions, and 499 career tackles and 52 tackles for a loss.

He’ll be a veteran in the secondary for Mike Zimmer and can be a mentor to young defensive backs Cameron Dantzler and Jeff Gladney. It also gives the Vikings stability on defense, with Mike Hughes playing just four games last year due to injuries.

Peterson was taken with the No. 5 overall pick out of LSU in the 2011 NFL Draft.