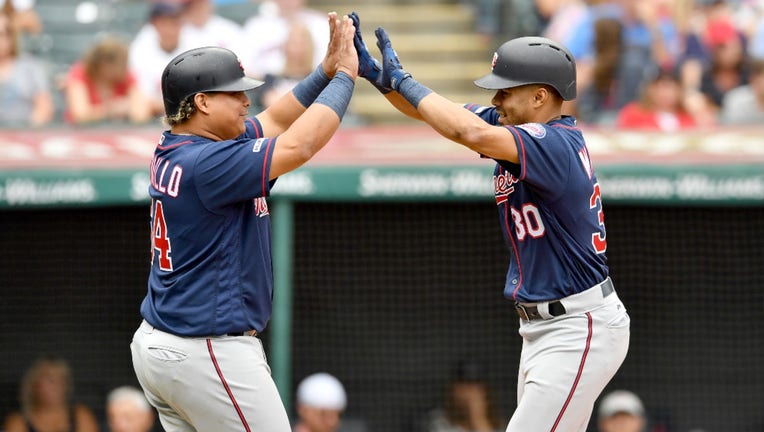 Willians Astudillo #64 of the Minnesota Twins celebrates with LaMonte Wade Jr. #30 after both scored on a home run by Wade Jr. in the sixth inning against the Cleveland Indians at Progressive Field on September 15, 2019 in Cleveland, Ohio. (Photo by

MINNEAPOLIS - The Minnesota Twins lost their season and series finale 7-5 at Cleveland on Sunday, but it was a successful weekend overall as they increased their lead in the American League Central Division to 4.5 games with 13 regular season games left.

The Twins and Indians were tied 2-2 Friday night before the game was postponed due to rain. It nullified Jake Odorizzi’s start, and made Saturday a critical day for the bullpen with a doubleheader and 18 innings to throw.

The Twins won the pivotal first game Saturday 2-0 behind a two-run homer from Jorge Polanco, and nine shutout innings between Devin Smeltzer, Zach Littell, Tyler Duffey, Sergio Romo and Taylor Rogers. The Indians had five hits in the game.

Polanco also had a diving catch that ended a bases loaded threat for the Indians.

The Twins extended their AL Central lead to 5.5 games after beating the Indians 9-5 in the nightcap of the doubleheader. Miguel Sano’s eighth-inning grand slam on a hanging breaking ball was the winning blast in a five-run inning. It was his 29th homer of the season.

Eddie Rosario and Nelson Cruz also homered in the game, and Polanco scored three runs and started the eighth-inning rally with an RBI double. The Twins now have four players with at least 30 home runs with Cruz (37) Max Kepler (36), Rosario (31) and Mitch Garver (30) in addition to Sano’s 29. The Twins lead MLB with 287 homers, one more than the 286 the New York Yankees have it.

The Indians prevented a series sweep with a 7-5 win on Sunday. Rosario homered twice in the game, while Sano and Lamonte Wade Jr. added homers.

The Twins (91-58) have a 4.5 game lead over the Indians with 13 games left. Minnesota’s magic number to win the division is nine. The Twins have a seven-game home stand this week with three against the Chicago White Sox, and four against the Kansas City Royals. The Indians are off Monday before hosting the Tigers and Philadelphia Phillies in a six-game home stand.