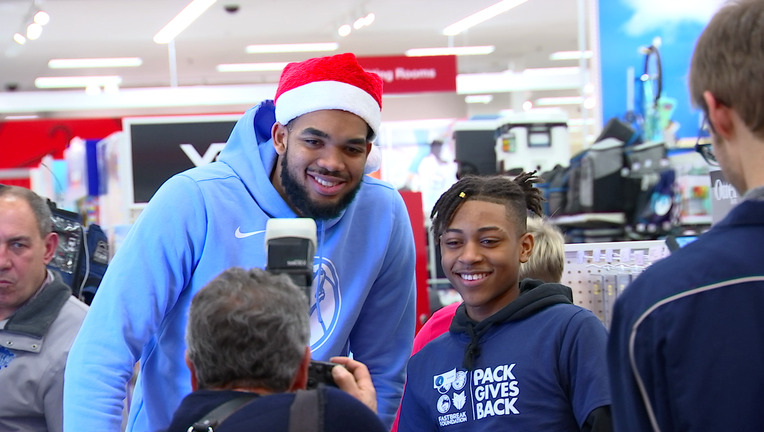 Minnesota Timberwolves stars Karl-Anthony Towns and Andrew Wiggins, along with all of their teammates and team officials, hosted a holiday shopping spree at Knollwood Mall. The night started with the kids going on Crunch’s Holiday Bus Ride.

At the time, they didn’t know they were going to Target. They also didn’t know they would be joined by their favorite Wolves players. The kids in the Big Brothers Big Sisters Jr. Pack got a $500 shopping spree, a $500 gift card, a $500 gas card for their family, a Fitbit fitness tracker and a free 40-inch flat screen TV.

The shopping spree was provided by the Pack Gives Back, and the Roger and Nancy McCabe Foundation.

“You always like to see people appreciate things. The kids were surprised, they had no idea that the players were going to be here. They didn’t even know we were coming to Target, so being able to get on that bus and see their excitement, I’m sure there will be a video floating around where you’ll see the kids jumping around. It’s something that just puts a smile on your face,” Timberwolves coach Ryan Saunders said.

Each child was paired with a Timberwolves player to shop. For Timberwolves star Andrew Wiggins, who is getting accustomed to being a father himself, it’s a special feeling to give back.

“I want to give my daughter the world. So being able to help all these kids, get them something that puts a smile on their face, whether it’s for them, their sisters, their brothers, mothers, whatever it is, just putting a smile on their face makes all the difference,” Wiggins said.

Saunders was especially touched by the child he was paired with, who called his mother to ask what she wanted for Christmas. Several of the kids Tuesday night mentioned using some of their $500 to get gifts for their siblings or family, when they otherwise might not get something to open on Christmas.

“Two years ago I had an individual who, we had to encourage him to spend money on himself because all he wanted to do was buy gifts for his siblings. Those are the special moments that you always remember and really stick with you,” Saunders said.

The Wolves got a chance to spread some holiday cheer to kids who otherwise might struggle during Christmas, and the kids got to hang out with some of their favorite NBA players.