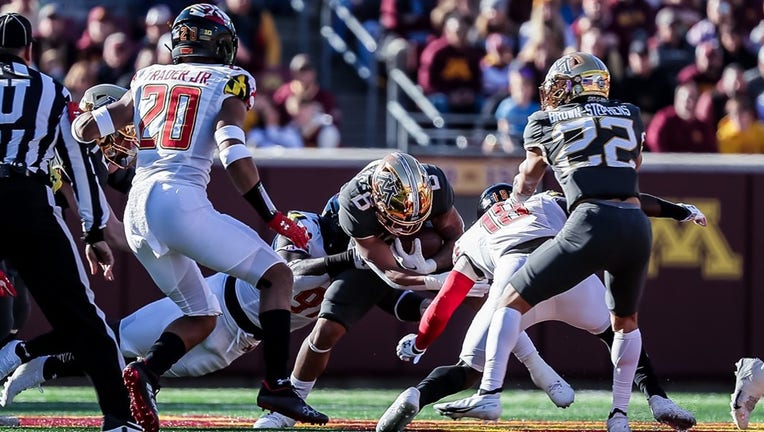 Ky Thomas had 14 carries for 101 yards and a touchdown for the Gophers during the first half against Maryland on Saturday at Huntington Bank Stadium. ((credit: University of Minnesota Athletics))

MINNEAPOLIS - The University of Minnesota football team saw on Saturday what it can look like when both sides of the football dominate at the line of scrimmage.

The Gophers’ offensive line imposed its will on Maryland as Minnesota ran for 326 yards and had four different players score rushing touchdowns in a 34-16 win over the Terrapins in front of more than 41,000 fans at Huntington Bank Stadium. Minnesota’s defense limited Maryland to 268 total yards, just 79 on the ground and limited Taulia Tagovailoa to one late, meaningless touchdown.

The Gophers (5-2, 3-1) have won three straight and are now tied with Iowa atop the Big Ten West division. It was a ground-and-pound attack, and Minnesota manhandled Maryland.

Behind an experienced offensive line, it was a pair of freshmen that led the Gophers’ run game. Ky Thomas had 21 carries for 139 yards and a touchdown. Mar’Keise Irving had 15 carries for 105 yards and a score. It was the first time since beating Illinois in October 2019 that the Gophers two running backs go for over 100 yards in the same game, when Rodney Smith and Shannon Brooks did so.

Bryce Williams had 13 carries for 48 yards and a touchdown, and wildcat quarterback Cole Kramer also scored from five yards out. The Gophers have had five players run for more than 100 yards in seven games this season, the first time that’s happened since 1985.

"It’s just a credit to the entire unit just being able to go out there and finish the game in that fashion. It was a good way to end the game from an offensive lineman standpoint," said offensive lineman Conner Olson, who set a school record with his 52nd straight start on Saturday.

Tanner Morgan finished 8-of-12 passing for 125 yards, becoming the fourth quarterback in program history to surpass 7,000 passing yards. He was largely a spectator as the Gophers piled up 451 total yards on the day.

"I had the best seat in the house. It was very dominant. Just seeing those guys being able to execute every single play, it was phenomenal to see," Morgan said. "It all starts up front and they made it go today."

Just as impressive in the win was Minnesota’s defense. It was personal for many players Saturday, after the Terrapins scored 45 points and went for 675 total yards last year at College Park.

Saturday, the Gophers sacked Tagovailoa twice, including a Myles Pinckney strip sack fumble on the opening series that Coney Durr recovered. Maryland ran for only 79 yards and contained the athletic quarterback.

Tagovailoa threw for nearly 400 yards on the Gophers last year. Saturday, he was just 17-of-27 for 189 yards. He also ran five times for just 10 yards.

"That quarterback is a heck of a player. I thought Joe Rossi and his entire staff did a great job of creating a blueprint to really force No. 3 into some bad throws and get to him as much as we possibly could," Fleck said. "Our players executed that blueprint perfectly."

Maryland’s top rusher on the day, Challen Faamatau, had seven carries for just 37 yards. Their only touchdown that mattered came from Javon Fleet-Davis on a 13-yard run in the second quarter.

The Terrapins only had a few chunk plays Saturday after the floodgates opened last year.

"I think for the staff, the team, everybody in general, last year left a bad taste in their mouth and we just kind of wanted to come into change the narrative on that," said linebacker Jack Gibbens, who led Minnesota with 10 tackles on the day.

Kramer and Thomas each scored in the second quarter to give the Gophers a 17-3 lead. Fleet-David scored to make it 17-10 before Minnesota’s only real blemish of the game, which had fans booing as they went to the locker room.

The Gophers ran the ball down the field, with Morgan clocking the ball in the final seconds instead of trying to take one more shot down the field. Matthew Trickett’s 38-yard field goal was blocked, and the Gophers were fortunate Maryland didn’t run it back for a touchdown that would’ve tied the game.

Fleck said after the game he would’ve been more aggressive trying to get points if Minnesota didn’t start the second half with the ball.

"If I would’ve known we were going to miss the field goal, or get it blocked, I wouldn’t have kicked it. I thought if we make it, we’re up 20-10 and we get the ball (to start the third quarter)," Fleck said. "It’s risk versus reward. We come away with three, it’s 20-10. We score a touchdown on the first possession, it’s 27-10. Unfortunately we don’t make the field goal."

It ultimately didn’t matter, with the Gophers scoring 14 points in the third quarter on touchdowns from Williams and Irving. The defense shut down Maryland, which managed 37 total yards in the frame.

Last week, it was "culture versus skill" to beat Nebraska. This week, the Gophers physically dominated and manhandled an athletic Terrapins team at the line of scrimmage.