After the Minnesota Vikings lost to the Philadelphia Eagles on Monday Night Football, Vikings head coach Kevin O’Connell is looking for redemption in their next game against the Lions.

MINNEAPOLIS (FOX 9) - The Minnesota Vikings host the Detroit Lions Sunday at the U.S. Bank Stadium, a game you can watch at noon on FOX 9.

The Vikings are facing an early critical moment in their season, coming off the first loss of the Kevin O’Connell era, 24-7 at the Philadelphia Eagles on Monday Night Football. The Vikings' defense couldn’t contain Jalen Hurts, who accounted for 390 total yards and three touchdowns. Kirk Cousins had three second-half interceptions, all killing potential Vikings’ scoring drives.

The Vikings will be without starting safety Harrison Smith, who has been ruled out after suffering a concussion at the Eagles Monday night. Andrew Booth Jr. is also out with a quad injury. Eric Kendricks, who was ruled questionable with a toe injury on Friday, will play against the Lions. The Vikings' other inactive players are Ty Chandler, Vederian Lowe, Esezi Otomewo, Luiji Vilain and Chris Reed.

The Lions come to Minneapolis after their first win of the season, 36-27 over the Washington Commanders. The Vikings are looking to avoid a 1-2 start heading to London next week, as they face the New Orleans Saints.

What time does the Vikings-Lions game start? 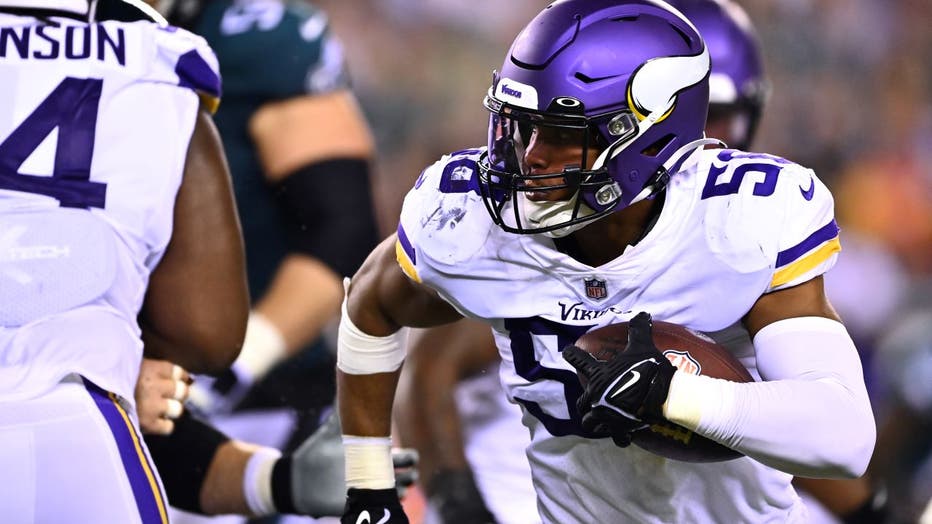 FILE PHOTO: Minnesota Vikings Linebacker Jordan Hicks (58) makes an interception in the fourth quarter during the game between the Minnesota Vikings and Philadelphia Eagles on September 19, 2022 at Lincoln Financial Field in Philadelphia, PA. (Photo (Photo by Kyle Ross/Icon Sportswire via Getty Images)