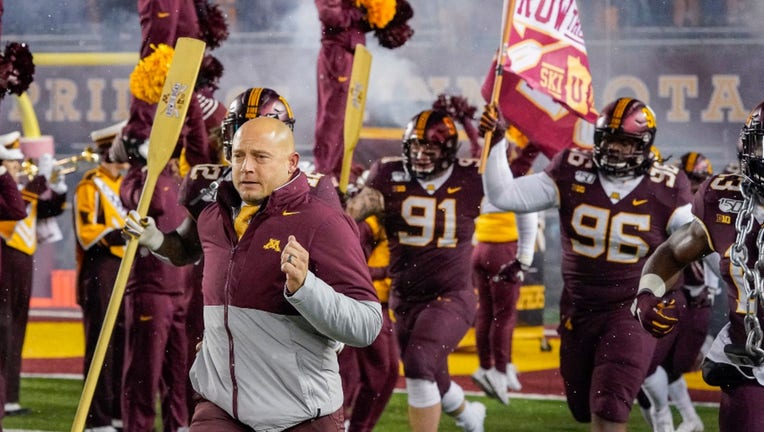 University of Minnesota Head Coach PJ Fleck during introductions in the game between the Minnesota Gophers and the University of Nebraska on October 12, 2019, at TCF Bank Stadium in Minneapolis, MN. ( (Photo by Bryan Singer/Icon Sportswire via Getty Images) )

MINNEAPOLIS - Everything PJ Fleck does as the head coach of the University of Minnesota football program has a purpose.

Fleck and the Gophers made sure to celebrate a 34-7 win over Nebraska last Saturday at TCF Bank Stadium. They improved to 6-0 on the season, the program’s best start since 2003. They’ve also won eight straight games dating back to the end of last season, winning at Wisconsin to earn a bowl game, then beating Georgia Tech in the Quick Lane Bowl.

That win streak hasn’t happened in more than 70 years at Minnesota. It’s worth celebrating. Fleck said earlier this week after pounding the Cornhuskers, you would’ve though the Gophers won the Super Bowl in the locker room after the game.

That journey so far has taken the Gophers to the top 25, ranked No. 20 this week in both the Associated Press Top 25 and USA Today Coaches Polls. It’s the first time Minnesota has been ranked since 2014.

Getting national recognition is great, but there are bigger things in store for the Gophers. They travel to Rutgers Saturday, host Maryland in two weeks and get a bye before their biggest game of the season, against current top-10 ranked Penn State. There’s a very real chance both teams will be in the top 15 in the country when they meet in Minneapolis on Nov. 9.

But as Fleck said earlier this week, and he’s said all season, the Gophers are focused solely and fully on Rutgers. That’s it, nothing else matters. His players have embraced the “one game championship seasons” every week, and that outside noise doesn’t get within the four walls of the program.

“Whether people think you’re 125th or first in the country, it doesn’t matter. What matters is what we think about ourselves. Yeah it’s cool, it’s cool for our program. But what really matters truly is how we view ourselves and how we’re going to get better every week,” said quarterback Tanner Morgan on the Gophers’ top 25 ranking.

He’s absolutely right. Rankings are great, but they don’t mean anything if the Gophers don’t perform to their standards. Minnesota heads to Rutgers, who is winless in the Big Ten, as 28.5-point favorites. That’s unheard of for a Big Ten team on the road.

There’s a reason for that. The Scarlet Knights fired head coach Chris Ash earlier this season. They’ve been out-scored 165-7 in four Big Ten games. They haven’t scored a touchdown since the second quarter against Maryland on Oct. 5.

None of it matters Saturday, as the Gophers seek a 7-0 start.

“We are the same as we were when we started our season in terms of our mentality, we are 0-0. We want to be 1-0 in the Rutgers championship season, period,” Fleck said.

The Gophers have developed a game plan in Big Ten play that might make them contenders for a division title. The defense has allowed just one offensive touchdown in the last two games. On offense, Rodney Smith and Shannon Brooks are running over defenses. The Gophers have run for about 650 yards in their last two victories.

After surviving is three non-conference games, Minnesota has found its footing in conference play and is getting better every week. The Gophers have scored 112 points in three Big Ten games. They haven’t done that since 1934, and it’s the most they’ve scored through three games since 1916.

For Fleck, there are some unknowns when it comes to preparing for Rutgers. The program has an interim coach in Nunzio Campanile, a former tight ends coach. Fleck called the preparation similar to “preparing for ghosts” in that you just don’t know what you’re going to see.

The Gophers attributed their recent success on defense to ramping up the intensity in practice. It started after their 38-31 victory at Purdue, where they allowed consecutive touchdowns to turn a 38-17 lead into a close game. Two weeks ago, Illinois scored two defensive touchdowns, and Fleck took the blame for their field goal after calling a timeout before their kicker missed.

Last week, the Cornhuskers didn’t score until they were already down 34-0 in the second half. The game was over.

There will be more firsts to come if the Gophers keep winning. But right now, it’s all about beating Rutgers. Staying in the moment has gotten Minnesota to 6-0, and that mindset isn’t about to change.

“Again right now, we’re just looking at a one week championship season. We’re looking at Rutgers and how we can be 1-0 this week,” Morgan said.