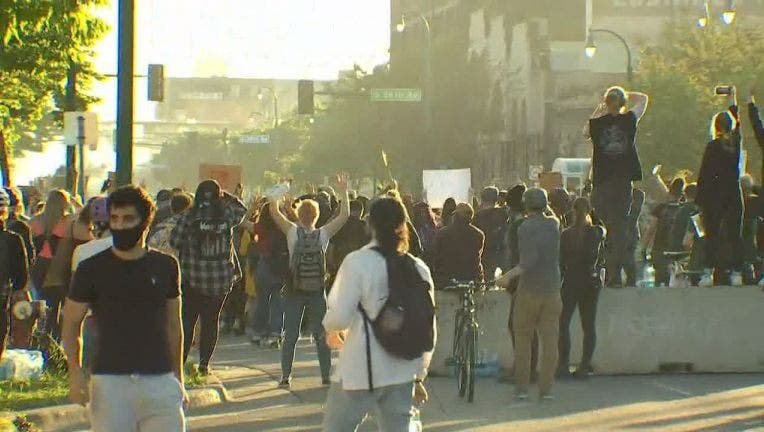 MINNEAPOLIS (FOX 9) - The Minneapolis City Council held an emergency meeting Saturday afternoon regarding the plans for another day of protests and unrest over the Memorial Day death of George Floyd.

Minnesota Public Safety Commissioner John Harrington briefed the City Council on how to the state plans to handle the unrest after officials admitted they underestimated the size of the riots in the city on Friday night and did not have the numbers to quell the unrest.

Gov. Tim Walz has now mobilized the full force of the Minnesota National Guard—the first time in the state’s history the full Guard has been activated. Harrington said they expect to have 2,500 soldiers and airmen out in force by Saturday afternoon.

An 8 p.m. went into effect Friday night and will be in place again on Saturday. Harrington said state and city authorities will not wait as long as they did on Friday to begin enforcing the curfew.

Harrington said officials do not see the protests and riots ending Saturday night. They are preparing them to continue throughout the weekend and possibly beyond.

“This lawless behavior, that’s not going to stop until we make it stop,” he said.

Losing the Minneapolis Police Department’s Third Precinct on Thursday night was a "rallying cry" for rioters, who then tried to take the Fifth Precinct at 31st Street and Nicollet Avenue on Friday night, Harrington said. City and state forces were able to hold the building.

"If we lose another precinct, it is my fear it will just embolden these folks,” he said.

Harrington said the state is also looking to bring more officers and firefighters to Minneapolis. The National Guard is still protecting firefighters, but last night “the National Guard guys got surrounded by what I would call rioters” intent on confronting the soldiers.

State and city leaders have repeatedly said they now believe the vast majority of the rioters causing destruction are from out of state.

“The folks who are out at night—especially late at night—were not your people,” Harrington told the city council members, saying law enforcement have arrested people with IDs from Arkansas, Iowa, Illinois, Michigan and Missouri.

However, the overwhelming majority of people arrested in connection with the Minneapolis unrest have Minnesota addresses, a search of the online Hennepin County Jail log shows.

Of the 45 people arrested for rioting, unlawful assembly, stolen property, burglary or robbery on May 29 and May 30 so far, 38 had Minnesota addresses, according to publicly available jail records reviewed by FOX 9.

Six had out-of-state address, and one person didn't have address information listed.

Walz said Saturday morning that as many as 80 percent of the people were outsiders.

The 45 people reviewed by FOX 9 were arrested by Minneapolis Police, the Hennepin County Sheriff's Office, University of Minnesota Police, or Minnesota State Patrol.