MINNEAPOLIS (FOX 9) - Mayor Jacob Frey said he made the call to evacuate police officers from the 3rd Precinct before rioters set the building on fire Thursday night as protests continued to boil over in Minneapolis after the death of George Floyd.

Police said officers were able to safely evacuate as rioters breached the perimeter and started a fire that spread through the building. Shortly after, city officials warned protesters to move from the building after receiving reports that gas lines may have been cut.

They urged people to move away from the building. In a tweet, Mayor Jacob Frey said the fire department is working to respond to the fires that have been set. However, he added, "We all need to work together to ensure the safety of our friends, family, and Minneapolis residents. And right now working together means clearing the area."

Frey said he made the decision to sacrifice the building and call off officers as rioters moved in. He told reporters early Friday morning that the decision came down to safety for both officers but members of the public.

"Brick and mortar is not as important as life," Frey said.

As for other city officials, in an appearance on CNN, Minneapolis Fire Chief John Fruetel appeared unaware that the 3rd Precinct was on fire or rioters had gained entry to it until anchor Don Lemon told him live on the air.

"That's very possible. I apologize for that," Fruetel said. He said he just came from another fire.

Fruetel said on CNN that the fire department would have to assess the scene before deciding to send in crews. 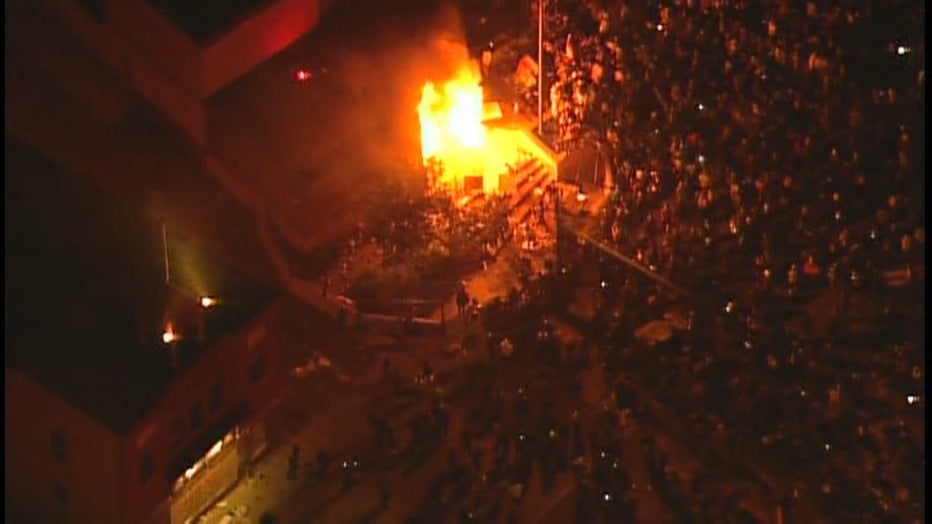 Firefighters have had "projectiles" thrown at them at other fires, Fruetel said. He said the windows of his chief's car have been blown out by rocks and other objects.

Speaking with FOX 9, Fruetel confirmed that some National Guard soldiers had moved into the city but only 35 were made available to the department as of about midnight. The Guard said 500 soldiers had been mobilized to the metro.

Earlier in the evening, flames could be seen shooting from the corner of the police station along Lake Street with a large crowd surrounded the building as protests once again turned violent on Thursday.

It all comes hours after a night of violence in Minneapolis sparked by the death of George Floyd in police custody.

After protests throughout the day, looters seized on the chaos, breaking into businesses and making off with whatever they could get their hands on. Others set fires that burned an AutoZone location along with a construction project and also left damage to a number of other businesses.

For the second night in a row, chaos has returned to the streets near Minneapolis' 3rd Precinct.

Thursday, it was much of the same. FOX 9 witnessed a group bust into a building and work to ignite a fire along Lake Street near the precinct.

Several cars were also set ablaze by rioters. Businesses that had boarded up their windows, after having glass smashed in the night before, were again targeted by looters who took down the boards once again. Our helicopter also spotted flames shooting from a pawn shop not far from the 3rd Precinct.

There was little in terms of police intervention but officers did return to the roof of the precinct building after moving off during mostly peaceful protests earlier in the day. Some officers also fired off flash bangs and tear gas in efforts to disperse the crowd.