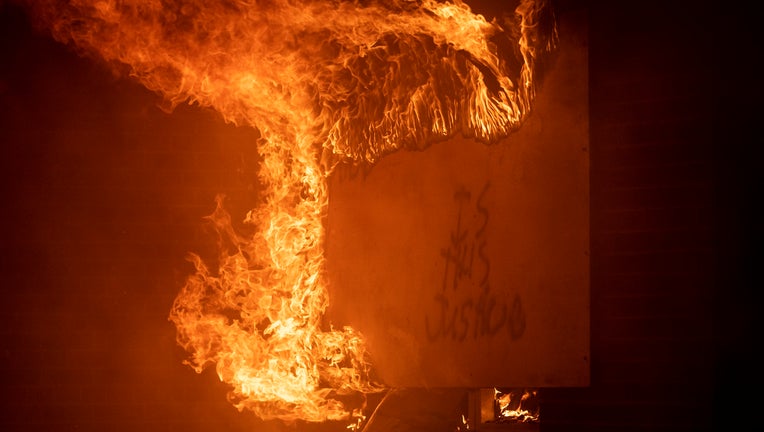 MINNEAPOLIS, MN - MAY 29: A fire burns at a Post Office on May 29, 2020 in Minneapolis, Minnesota. Protests have been ongoing in the state and around the country since George Floyd's death while in police custody on Monday. (Photo by Stephen Maturen/

"This is no longer about protesting, this is about violence," Mayor Frey said. "I want to be clear, the people who are doing this are not Minneapolis residents.”

"We are under assault by people who do not honor our values," Minnesota Governor Tim Walz said in a press conference Saturday. Walz activated the full Minnesota National Guard in response to the riots.

“The message is clear, Minnesota: we had a tragedy on Monday night, we understand the work we need to do and the generational pain that went into what happened with George Floyd and that murder. But at this point in time, nothing we do to address these inequities, nothing we do to provide justice to George Floyd and his family that I spoke with last night, none of those things matter to any of these people who are out there firing upon National Guard, burning businesses of our communities, and making intent on disrupting any semblance of civil life,” Walz continued.

Peaceful demonstrations are planned throughout the city Saturday.

The curfew in Minneapolis and St. Paul - as well as several neighboring suburbs - continues through the weekend. Mayor Carter said the 8 p.m. curfew is designed to get legitimate protestors to stay home so the city can focus on arresting and stopping outside agitators. Mayor Frey also urged protestors to stay home.