Trump took the stage in front of the capacity crowd Thursday night and guaranteed victory in Minnesota in 2020.

From impeachment to Democrat legislators and candidates, Donald Trump pulled no punches Thursday night during his 'Keep America Great' rally at Target Center.

Trump focused much of the beginning of his speech on the impeachment investigation against him.

"Democrats are on a crusade to destroy our democracy...We will never let it happen - we will defeat them," he said.

Trump also took on Minneapolis Mayor Jacob Frey, with whom he sparred earlier in the week about rally secuirty expenses.

President Trump: Minneapolis, you have got a rotten mayor

President Trump took shots at Minneapolis Mayor Jacob Frey on Thursday as he rallied with supporters in Minneapolis.

The President launched more of his continued attacks against the media as well.

A staple of his rallies, Trump went on to re-hash his 2016 election victory nearly an hour into the speech.

In his first Minnesota endorsement of the 2020 campaign, Trump pointed out former U.S. Rep. Jason Lewis, who is running against Sen. Tina Smith for Smith's Senate seat. 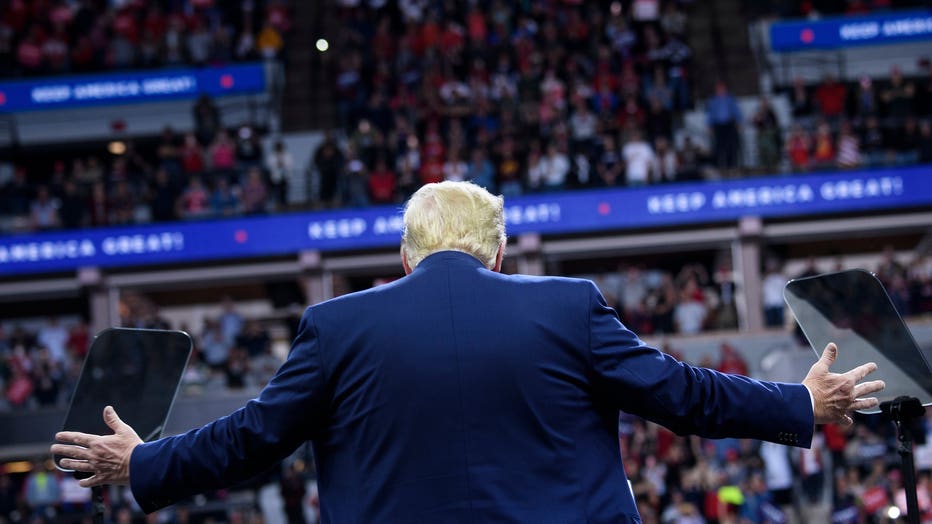 Lt. Bob Kroll, the architect behind the "Cops for Trump" shirts worn by Minneapolis Police Officers during the rally, was then called onto the stage with officers from the MPD. Kroll, in a brief statement, thanked Trump for everything he had done for law enforcement, calling him a "wonderful President."

Trump then brought up refugee resettlement, explaining that municipalities like those in Minnesota must consent to receiving them. He went on to mention his travel ban and other immigration-related issues.

More than an hour into the speech, Trump then discussed his recent decision to pull back U.S. troops from parts of northeast Syria after Republican critics and others said he was sacrificing an ally in the Syrian Kurdish forces.

Trump then took on another local topic, announcing he was reopening the Superior National Forest to "mineral exploration" of the iron ore mines of the Iron Range. He said the Iron Range is "back in business."

Trump's son, Eric Trump, was the first to take the stage Thursday night.

"We are going to win this state," he said. "Make no mistake about it."

He also brought up Presidential Candidate Joe Biden and his son's dealings in Ukraine. The crowd then chanted, "Lock him up," at Trump's son.

Pence followed Eric Trump, saying "I stand with Donald Trump." He added that Minnesota and America both need four more years of President Trump in the White House.

The President and Republican U.S. Representatives Pete Stauber and Tom Emmer, of Minnesota, were on Air Force One Thursday. The Presidential plane touched down at Minneapolis-St. Paul International Airport just before 6:15 p.m. Thursday night. 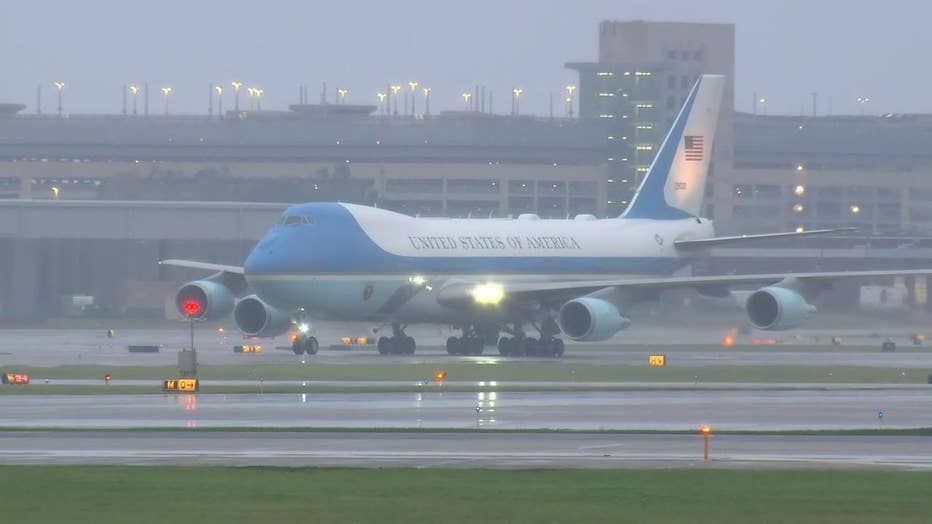 The President was greeted by Rep. Jim Hagedorn and Senate Majority Leader Paul Gazelka as he deplaned.

Trump and his motorcade then traveled through the south Twin Cities metro area and into downtown Minneapolis. All roads on the President's route were closed until he arrived at Target Center.

Trump was about 35 minutes late in leaving Washington Thursday afternoon, which meant his speech started later than its 7 p.m. scheduled time. 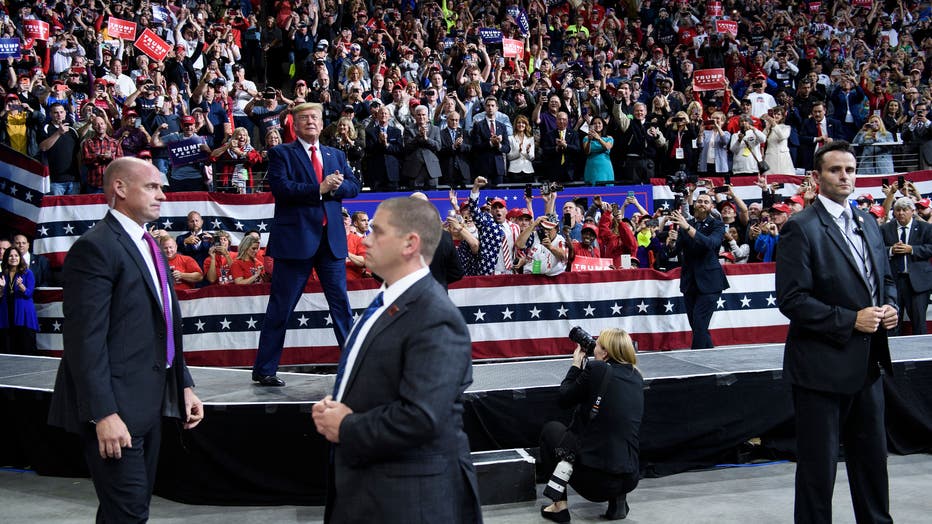 Before leaving Washington for the rally, Trump told reporters that "I think we can win" Minnesota. The president said he thought controversial Democratic U.S. Rep. Ilhan Omar -- whose district he is speaking in tonight -- is helping him in Minnesota and elsewhere.

On the impeachment front, two associates of Trump lawyer Rudy Giuliani were arrested Wednesday at Dulles International Airport while trying to board an international plane with one-way tickets. Trump said Thursday that he did not know the two men. 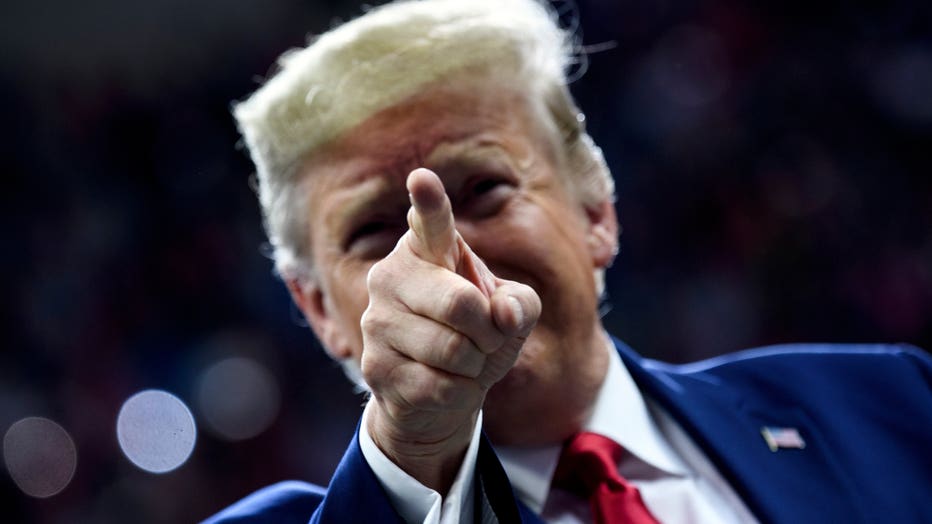 Meanwhile, The Washington Post reported Thursday that four national security officials raised concerns before and after Trump's call with Ukraine's president that has led to the impeachment inquiry. In that phone call, Trump asked Ukraine's leader to investigate political rival Joe Biden.

Before Trump's address, Minneapolis Police Federation President Bob Kroll addressed the capacity crowd at Target Center. Kroll made headlines in recent days for his clash with the city of Minneapolis over its policy regarding uniformed officers making political endorsements. It led him to create a "Cops for Trump" t-shirt he sold on the Police Federation's website.

In his remarks, Vice President Pence said that cops are for Trump because Trump is for cops.

A whistleblower said Trump's aides tried to "lock down" the rough transcript of a phone call Trump had with Ukraine's president, and text messages between administration officials indicate that Trump was seeking the investigation of Biden in exchange for an official visit by Ukraine's president to the White House. 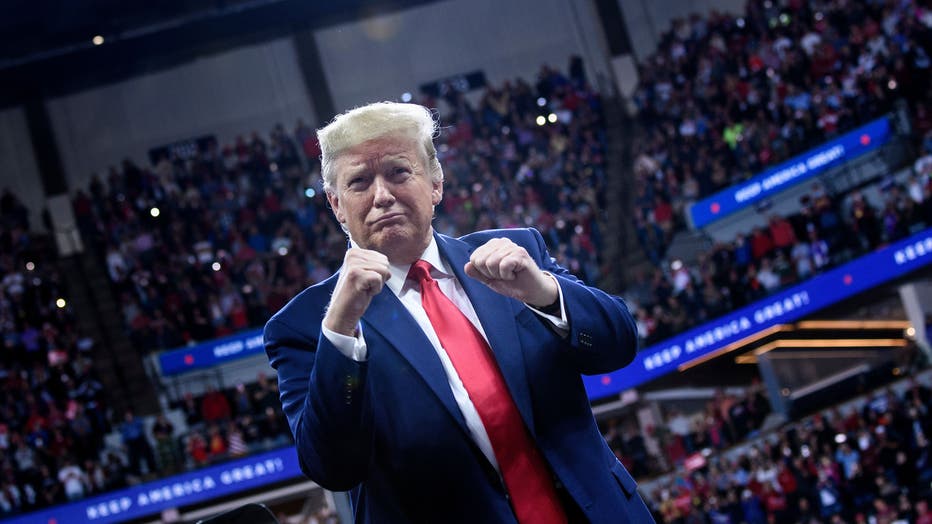 Trump lost Minnesota to Clinton by 1.5 percentage points in 2016. He has made clear that he wants to win the state in 2020.

Pence also attended an event at Safety Signs in Lakeville earlier in the afternoon. Lakeville is within Minnesota's second congressional district, a seat held by Democratic U.S. Rep. Angie Craig but a district that Trump won in 2016. Republicans are targeting Craig for supporting the impeachment investigation.

Crowds line up ahead of Trump rally in Minneapolis

Scores of people have descended on downtown Minneapolis ahead of Thursday evening's rally for President Trump.

Trump supporters lined up through the skyways above Minneapolis to get into the rally Thursday afternoon. The line extended outside Ramp C near Target Field.

Near the stadium, protesters and Trump supporters gathered, holding peaceful discussions but growing more vocal as the evening went on.