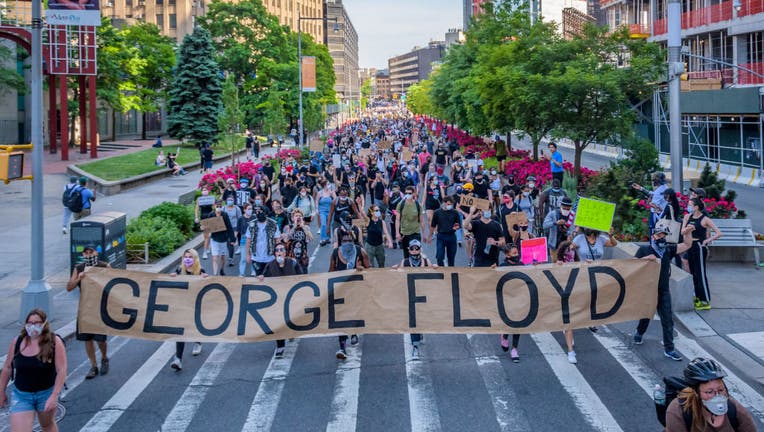 MINNEAPOLIS (FOX 9) - One month ago, at the intersection of 38th and Chicago in Minneapolis, 46-year-old George Floyd died in Minneapolis police custody.

That fateful encounter on Memorial Day ignited a movement to recognize and address racism in Minneapolis and similar reckonings followed in communities all over the world.

What followed Floyd's death was a chaotic, historic and emotional month that included devastating riots in the city of Minneapolis, the first ever full deployment of the Minnesota National Guard, a star-studded Minneapolis funeral for Floyd, worldwide protests and officials questioning the future of policing in American cities.

Officers respond to a report of forgery in progress at 3759 Chicago Avenue South around 8:30 p.m. Memorial Day night. When they arrive, officers encounter Floyd, identified as a suspect, in his car. Police said they ordered Floyd out of the vehicle and that he physically resisted officers. Floyd was handcuffed. Bystander video shows the moments that followed, in which Floyd is pinned down by officers, with one officer keeping his knee on Floyd's neck until he loses consciousness. The ambulance arrives minutes later.

Minneapolis city leaders responded to the death of George Floyd in police custody.

The names of all four Minneapolis Police officers involved in the arrest that lead to the death of George Floyd are released. They are Derek Chauvin, Thomas Lane, Tou Thao and J. Alexander Kueng.

Beginning as protests into the death of George Floyd, the demonstrations devolved into widespread riots, looting and intentionally set fires that night. An Autozone location, a Cub Foods and a nearby under-construction apartment building burned in the melee.

Rioters took to the streets of Minneapolis through the night Thursday, including setting Minneapolis Police Department's Third Precinct on fire as thousands looked on. The riots damaged more than 170 businesses throughout the Twin Cities.

Minneapolis Police Officer Derek Chauvin was taken into custody after being seen in the video kneeling on George Floyd’s neck as Floyd repeatedly said, “I can’t breathe.”

Curfews were implemented in both Minneapolis and St. Paul in an effort to quell unrest in the streets. That night, protesters move outside the Minneapolis Police Department's Fifth Precinct. The nearby post office and a Wells Fargo are set on fire and other nearby businesses are damaged.

Gov. Tim Walz announced a full mobilization of the Minnesota National Guard in response to the rioting Thursday and Friday night. It was the first time in state history the full National Guard was activated.

A peaceful protest began at U.S. Bank Stadium, but it moved onto I-35W in Minneapolis later in the afternoon. While thousands of demonstrators were on the I-35W bridge, a semi truck drove into the crowd in the northbound lanes. The incident was later determined to be unintentional.

Truck barrels into George Floyd protesters on I-35W in Minneapolis

DISCLAIMER: Video may be difficult for some to watch. A tanker truck ran into a group of thousands gathered on the Interstate 35W Bridge in Minneapolis. The group was taking a knee to protest the police-involved death of George Floyd. Video Courtesy: MnDOT

Four former Minneapolis Police officers were taken into custody after being charged for their roles in the death of George Floyd.

George Floyd’s memorial service is held at North Central University in Minneapolis. It was a star-studded event capped off by an 8 minute, 46-second moment of silence.

The Hennepin County Medical Examiner's report ruled the death of George Floyd a homicide. The updated report stated that George Floyd experienced a cardiopulmonary arrest while being restrained by law enforcement officer(s).

Protesters begin calls for community-led safety, rather than the Minneapolis Police Department.

The Bureau of Alcohol, Tobacco, Firearms and Explosives released photos and videos of people of interest in the destruction of Minneapolis during the riots after Floyd’s death.

Minneapolis Police Chief Medaria Arradondo announced he is withdrawing from contract negotiations on the unfinished contract with the police union and restarting an effort to identify troubled police officers through early warning signs.

All 12 members of the Minneapolis City Council co-authored and introduced a resolution “declaring the intent to create a transformative new model for cultivating safety” in the city. The resolution is the first official step from the council regarding the Police Department.

A new 911 call transcript shows a 911 dispatcher called a Minneapolis Police sergeant over her concern of the way officers were handling the deadly arrest of George Floyd Memorial Day night.

A newly released transcript details the moments a 911 dispatcher concerned about the George Floyd response decided to contact a Minneapolis police sergeant that evening.

Minnesota lawmakers failed to pass police accountability bills in the wake of George Floyd's death during a special session.

Gov. Walz called it an embarrassment.

MPD Chief Arradondo said George Floyd’s death was “murder” and did not happen due to “a lack of training.”

Since the killing of George Floyd, the Minneapolis police union was noticeably quiet amid mounting criticism. Nearly a month after Floyd’s death, union leaders broke their silence, saying the union has become a “scapegoat.”

Speaking for the first time this week, Minneapolis Police Federation President Bob Kroll says the union has become a scapegoat after the death of George Floyd.