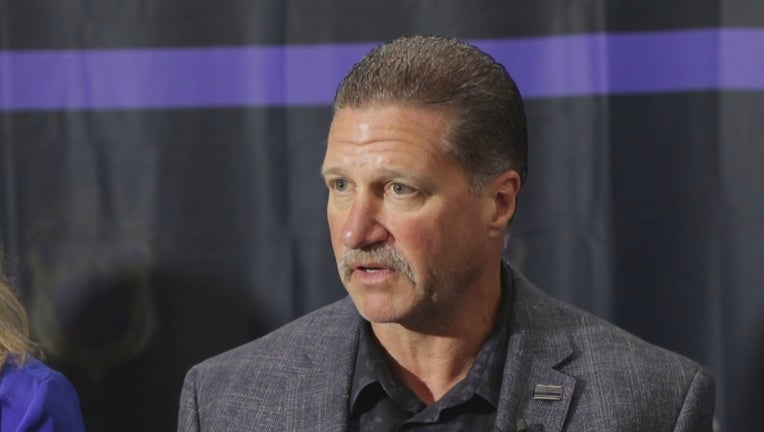 MINNEAPOLIS (FOX 9) - Since the killing of George Floyd, the Minneapolis police union has been noticeably quiet. Now, nearly a month after his death, union leaders are breaking their silence.

Alongside two women sergeants, a Black officer, and with a public relations team in the room, Minneapolis Police Federation President Bob Kroll is finally saying what could have been said four weeks ago, about those 7 minutes and 46 seconds.

Minneapolis Police Federation speaks out after death of George Floyd

Since the killing of George Floyd, the Minneapolis police union has been noticeably quiet. Now, nearly a month after his death, union leaders are breaking their silence.

“Horrible display of police work that doesn’t reflect us at all,” said Kroll.

The union is also trying to shift the narrative from the killing of George Floyd to the riots afterward and the leadership of the mayor and city council.

FOX 9 Reporter Tom Lyden: You believe the decision was made that morning to give up the Third Precinct?

Kroll: Most certainly was.

Lyden: As a prize for the protesters?

Kroll: Symbolic victory … If I can get in minds of city leaders, they thought if they give them the Third Precinct, it’ll stop it and go away. And as you saw the result was they kept going and pretty much destroyed south Minneapolis.

In five years as union president, Kroll has proven to be a divisive figure, from his appearance at a President Donald Trump campaign rally to calling Black Lives Matter a terrorist organization.

In a letter to his fellow union members, Kroll wrote, “What is not being told is the violent criminal history of George Floyd.” He said he now regrets that letter.

Lyden: Do you feel you’ve become a lightning rod for this union and are you still able to represent them?

Kroll: I feel not just myself, but the board and our federation has had the blame shifted to us by the political leadership in the city and the state that we’ve been made, become the scapegoat for their lack of decision-making ability and the lack of to keep people and property safe.

Lyden: Do we have a racist system of policing in this country, Bob?

Kroll: I don't believe so. We can look beyond policing and look at all types of other racial injustices that exist. The microscope is obviously on policing, but you can always improve. Is it a systematic failure? I say no.

While the union leaders talked a lot about the city council, suggesting a lack of leadership, they were much more muted in their criticism of Police Chief Medaria Arradondo. Kroll said he considered the chief a friend up until the point the chief and mayor made the decision to pull out of negotiations. The union has been without a contract since January. Union leaders say change is possible, but it needs to be a conversation, and not just about seven minutes and 46 seconds.

“We had one horrendous act recently,” said Kroll. “Don’t paint us all with that brush. These cops are out there protecting and serving, dealing with the worst of the worst all the time and protecting the community, more than people realize and more than we get credit for.”

The union made it clear they have nothing to do with the criminal defense of Derek Chauvin - that is happening through a legal defense fund. At this point, they’re not making a decision on whether to defend the three other officers if they try to get their jobs back. Union leaders say they’re going to wait for the completion of the investigation.

Activists have called for Kroll to resign, but he says he has no plans to do so. His term runs through May 2022.