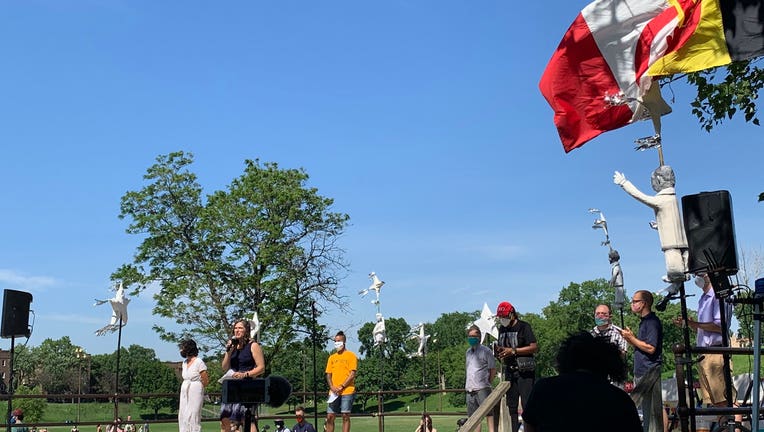 MINNEAPOLIS (FOX 9) - Nine members of the Minneapolis City Council announced their support for de-funding the Minneapolis Police Department and replacing it with a community-based public safety model at a rally in Powderhorn Park Sunday afternoon.

At the end of the rally, the councilmembers and some community activists committed to ending the Minneapolis Police Department through the budget process. The group also announced its intention to engage every willing community member to ask what safety means to them and create a “new transformative model for cultivating safety.”

With the support of the nine councilmembers, they have created a veto-proof supermajority in support of disbanding the police department. However, to make significant changes to the department or funding for the department, they will likely need a public vote to change the charter.

“It is clear that our system of policing is not keeping our communities safe,” said Bender. “Our efforts at incremental reform have failed, period.”

Bender went on to say she and the eight other councilmembers that joined the rally are committed to ending the city’s relationship with the police force and “to end policing as we know it and recreate systems that actually keep us safe.”

Community reacts to City Councilmembers calling for disbandment of MPD

Councilmember Ellison said frankly, "This council is going to dismantle this police department."

Similarly, Councilmember Cano said the council would "abolish the Minneapolis Police system as we know it."

Said Councilmember Phillippe Cunningham of the community-based policing alternative the councilors are proposing, "All of that money is going to the police department and what do we have in return? Pain, trauma and hurt"

At the end of the rally, the crowd gathered at Powderhorn Park began a chant of "De-fund, MPD."

“This is an opportunity for us to get rid of a system that was built not to provide safety and serve and to start to put into place a system that does provide that safety,” she added.

There are a total of 12 Minneapolis City Councilmembers. A majority of them now support ending the city's relationship with the MPD.

Notably, Mayor Jacob Frey did not attend the rally Sunday. He was booed at a de-fund the police rally in Minneapolis Saturday afternoon.

In a statement after the rally, Frey said the following:

I’ll work relentlessly with Chief Arradondo and alongside community toward deep, structural reform and addressing systemic racism in police culture. And we’re ready to dig in and enact more community-led, public safety strategies on behalf of our city. But I do not support abolishing the Minneapolis Police Department.

The mayor wasn't the only one expressing skepticism Sunday. Some, like Dominique Howard, engaged in the conversation in small groups at Powderhorn Park Sunday with people he doesn't agree with in search of answers.

"I think that de-funding the police in general is not the immediate solution," Howard said. "I feel like it's an impulsive reaction to what is going on."

The Anoka County Sheriff also voiced his opposition to the proposal, warning the city that abolishing its police force could hinder the Sheriff's relationship with the city going forward.