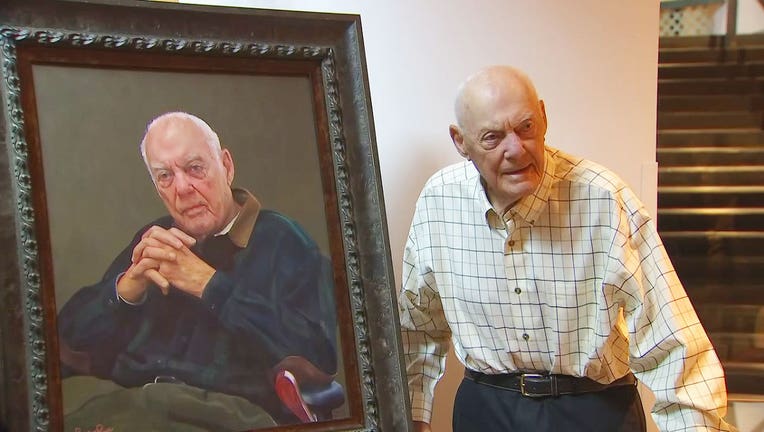 Bud Grant poses in front of the portrait at the Minnesota History Center. (FOX 9)

(FOX 9) - A Vikings legend is now officially part of Minnesota history, as his portrait will soon hang in the Minnesota History Center.

Wednesday, retired coach Bud Grant presented the portrait to the Minnesota Historical Society during a ceremony at the center. Grant coached the Minnesota Vikings for 18 years, from 1967 to 1985, leading the team to the Super Bowl in four separate years.

The greatest Vikings head coach of all time, Bud Grant, became officially part of the state's history on Wednesday as his portrait was presented to the Minnesota Historical Society by the coach himself along with the artist who painted it.

"Sometimes, ah, I don’t realize how old I am, I’m starting to look older when I look in the mirror every day," said Grant.

At 94, Bud Grant is as humble as ever. No ego from a man who if Minnesota had a Mount Rushmore of sports, he’d be Washington.

"I think I was in Europe at the time and I was having a conversation," said painter Mark Balma, recalling what led him to paint Grant's portrait.

Balma, a Minnesotan who has painted four official presidential portraits and three prime ministers, was asked who was at the top of his wish list. His mind went back to those Sunday afternoons of his youth.

"The person that came to mind right away was Bud Grant," Balma explained. "I thought of him as a statesman of the sports field. I had done all these official portraits and it seemed like yeah, he had that kind of quality."

So, it became that at Bud’s old office at Winter Park, the two sat 12 separate times as Balma painstakingly captured Grant on canvas.

"And a perfectionist by the way," said Grant. "So when he says we sit, I came back to Mark and say, 'What didn’t we do last time...  'Well your eyebrow...' So that’s what makes a great artist I’m sure."

Through their conversations about Super Bowls, about hunting, and about painting, he saw the essence of Grant.

"And I tried to represent him in this pose that he does when he’s thinking and he’s thoughtful," explained Palma.

"I’m more of a thinker than a talker," said Grant. "And I don’t always express myself verbally or written, but I’m thinking a lot."

Though the portrait was finished three years ago, it didn’t have a home until now, as it was presented Wednesday to the Minnesota Historical Society to be put on display.

Grant, with his family looking on, did share what he was thinking: "You’ve made an old man very happy. Thank you very much."