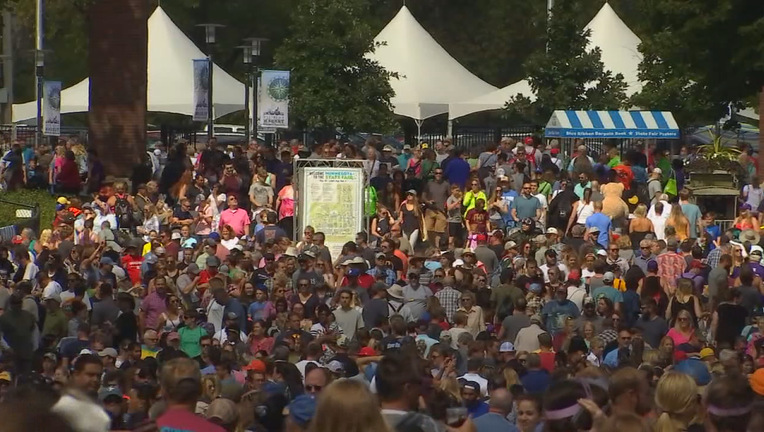 It was a record-breaking year for attendance at the Minnesota State Fair in 2019. (FOX 9 / FOX 9)

FALCON HEIGHTS, Minn. (FOX 9) - The general manager of the Minnesota State Fair says the Great Minnesota Get-Together is still on track to start on Aug. 27, despite the COVID-19 pandemic.

In a statement, general manager Jerry Hammer said this year’s State Fair will be all or nothing—alternate fair dates, a change in the duration of the fair or significant reductions in the scale of the fair are not being considered.

The coronavirus may put the kibosh on the Minnesota State Fair and it has vendors disappointed.

As of now, Hammer said there no specific date by which they have to decide whether to hold the State Fair in 2020 or not.

“We continue to remain hopeful that we can celebrate this year in our usual style, but ultimately please know and rest assured the State Fair will do the right thing for Minnesota, our nation and our world,” Hammer said.

Gov. Walz says it is difficult to see Minnesota State Fair operating this year due to COVID-19

At a press conference Thursday, Minnesota Gov. Tim Walz said he thinks it will be "very difficult" to see the Minnesota State Fair operating this year because of COVID-19.

Walz addressed the possibility of the State Fair being canceled at his news conference Thursday.

The governor said the crowds at the fair are the worst thing for controlling the spread of COVID-19.

“I wouldn’t make a definitive call, but I also don’t want to give any false hope on this,” Walz said. “I think it’ll be very difficult to see a state fair operating. I don’t know how you social distance in there.”

The general manager of the Minnesota State Fair says the Great Minnesota Get-Together is still on track to start on Aug. 27, despite the COVID-19 pandemic.

A number of other large summer events in Minnesota have already been canceled or postponed, including Grandma’s Marathon, Twin Cities Pride and Rock the Garden.

For vendors, no fair would be a blow to their business.

"Economically, for myself and my son and all the kids who work for me, that would put a strain on everything," said Carla Wood of Gizmo. "Because if the Minnesota State Fair gets cancelled, more than likely the Iowa State Fair would get cancelled because we’re before you, which is pretty much most of my income."

Drew Levin from Turkey To Go says he understands if the fair has to be called off for health precautions. But, he has hope that some way he can find a way to get his product to fairgoers despite the pandemic.

"If it doesn’t happen, I still believe there’s a way to make it happen in a different format," said Levin. "In which we will 100 percent participate in, which means making our sandwiches and maybe doing it by home delivery or some other way. Maybe teaming up with some other booths would be a really great way to celebrate the fair."

But, there is still time and that's what Carla Wood is banking on.

"I’m hopeful," she said. "I really am. Because we’re still what are we talking May, June, July -- four months out."

The 2020 Minnesota State Fair is scheduled to run from Thursday, Aug. 27 through Labor Day.