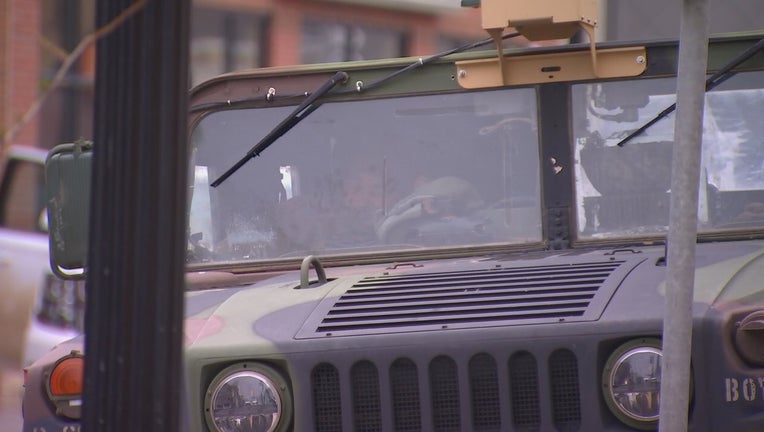 A National Guard vehicle sits in Uptown as the city awaits the verdict in the Derek Chauvin trial. (FOX 9)

MINNEAPOLIS (FOX 9) - Following a peaceful night of celebrations in Minneapolis after the guilty verdict in the Derek Chauvin trial, the visible law enforcement presence in the Twin Cities metro will decrease throughout the week.

Operation Safety Net, a multi-jurisdictional law enforcement effort, was formed in preparation of possible unrest during the trial. However, OSN also responded to protests last week at the Brooklyn Center Police Department following the deadly police shooting of Daunte Wright.

Following a peaceful night of celebrations in Minneapolis after the guilty verdict in the Derek Chauvin trial, the visible law enforcement presence in the Twin Cities metro will decrease throughout the week.

While some of the protests last week turned violent, the last several nights have been peaceful. OSN Leaders announced Wednesday they would be moving into "Phase 4" of their plans, meaning a wind-down of operations.

Law enforcement spray protesters outside the Brooklyn Center Police Department during fourth night of protests over the fatal police shooting of Daunte Wright.

"From a State Patrol perspective, we are actively demobilizing in a strategic way both around the State Capitol with forces and partnership with the National Guard and those troopers that came from out of state, our employees, our members are ready to go home," said Col. Matt Langer of the Minnesota State Patrol.

As Operation Safety Net makes this transition, some businesses still have windows boarded up with plywood. Leaders said police patrols will continue.

"We’re not sending everyone home," said Hennepin County Sheriff Dave Hutchinson. "We have plans in place so if these issues arise, one thing this has taught us is we need each other and we will be there for the citizens of Minneapolis."

It is unclear when the barricades surrounding the Hennepin County Government Center and Minneapolis City Hall will be removed. Sheriff Hutchinson said it could take "days or weeks," depending on logistics with the contractors.