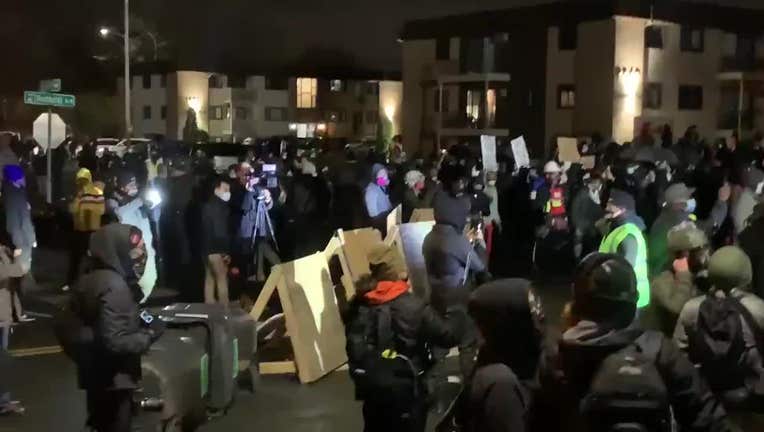 During the fourth night of protests in Brooklyn Center over the fatal police shooting of Duante Wright, law enforcement give orders to disperse and spray protesters outside the Brooklyn Center Police Department.

At a midnight press conference Col. Matt Langer of the Minnesota State Patrol said about 24 people were arrested Wednesday night, ranging from curfew violations to probable cause riot. Operation Safety Net later tweeted that 22 had been arrested.

It's a much lower arrest total from Tuesday night, which saw 79 arrests. Hennepin County Sheriff David Hutchinson said the majority of the people who have been arrested are not from Brooklyn Center.

"The number one tool that we wanted to use tonight was patience and that's what we exercised for a long period of time, even though we saw groups coming and fortifying and we saw umbrellas, plywood shields and makeshift barricades and blocks and bricks brought in," said Langer.

No formal protests were scheduled Wednesday, but the National Guard, the Minnesota State Patrol and the Brooklyn Center Police Department remained in place in front of the police headquarters, which has been fortified by a temporary fence.

Protesters light off fireworks outside Brooklyn Center Police Department on the fourth night of protests after the Daunte Wright shooting.

Tensions grew as the night went on. People were seen throwing objects at law enforcement. Demonstrators were also seen erecting a small shield to protect them from tear gas and marking rounds fired by police.

Three dispersal orders were given to protesters in the 9 p.m. hour and another was issued after 10 p.m. In one instance, police were seen spraying demonstrators as they approached the barricades underneath umbrellas.

Fireworks were also seen in the sky near the protest. Police say demonstrators fired fireworks at them, too.

For the second night in a row, law enforcement officials say there also was not any looting in the city.

In the wake of the protests following the police shooting of Daunte Wright, Brooklyn Center city leaders announced the creation of the Brooklyn Center Community Crisis Team to promote peaceful protests and establish connections with community members Wednesday afternoon.

For the fourth night in a row, demonstrators gathered outside the Brooklyn Center Police Department as a large law enforcement presence stood by.

According to Acting City Manager Reggie Edwards, the Brooklyn Center Community Crisis Team has nine volunteer members from businesses, the faith community and city government. The team had its first meeting Wednesday and will continue to meet for the next 10 days to discuss strategies, such as having groups wear an identifying item signifying they are peaceful protesters. 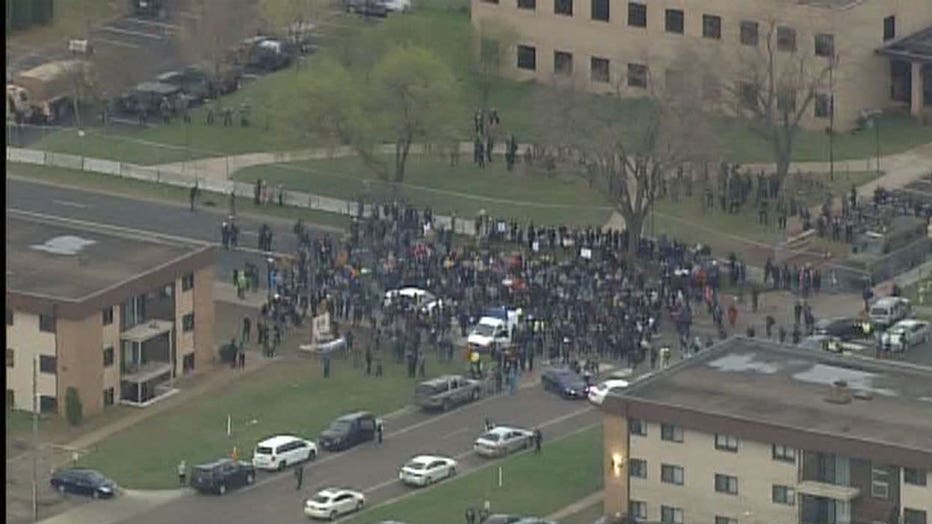 Protesters returned to the Brooklyn Center Police Department for a fourth night Wednesday.