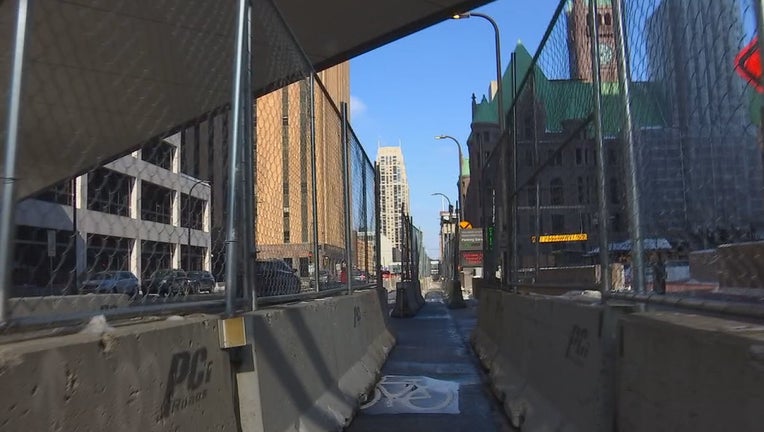 Fencing has been installed around the Hennepin County Government Center and City Hall ahead of the Derek Chauvin trial. (FOX 9)

"My job is to protect the justice system no matter what. We have to let this process go on," said Hutchinson.

This week, fencing and barricades went up around the Hennepin County Government Center and City Hall with jury selection set to begin March 8.

The sheriff explained they’re planning for the worst, pointing to the rioting that unfolded across the Twin Cities after the deadly arrest of George Floyd last May. He said the plaza, which is 18 floors beneath the courtroom, will be open for the public to gather and protest, but there will be limitations.

"We’re asking people to maintain civility," said Hutchinson. "But if there are problems, the small percentage of people who want to cause harm, we’ll be ready for you. People do damage or hurt people, getting rioted up, we’ll arrest you and you’ll be across the street at the jail."

Sheriff Hutchinson said law enforcement watched and learned from the Jan. 6 storming on the U.S. Capitol.

"We don’t want these fences up -- again, this is not appealing --  makes everybody’s life more difficult, but we cannot allow what happened on Jan. 6 in D.C. to happen here. That’s the U.S. Capitol that got infiltrated," he said.

The sheriff has cancelled all staff vacations for the month of March through the end of the trial, so it’s all hands on deck in what will be a massive security operation involving multiple agencies including the National Guard.

Meantime, inside the Hennepin County Government Center the main skyway level will be a heavily restricted zone. The focus is to allow the trial to go off without any disruptions.

"We have to maintain safety," said Hutchinson. "That is our job -- safety and security of this building, so the Judge and jury can do their job."

Jonathan Mason with the 10K Foundation is a community organizer, who has promised to gather outside the government center every single day of the trial. He is predicting large crowds will join with the hopes of projecting a live broadcast stream of the trial on an exterior wall.

Mason says he doesn’t appreciate all the fencing and barbed wire downtown, describing it as a "hindrance" to the movement’s constitutional right to be heard. That’s one area that may be a source of confrontation. Judge Peter Cahill has said he doesn’t want any disruptions in his courtroom.

"Being that we have loud speakers and bullhorns, more than likely, they will hear us," said Mason. "Who knows what that is going to look like?"