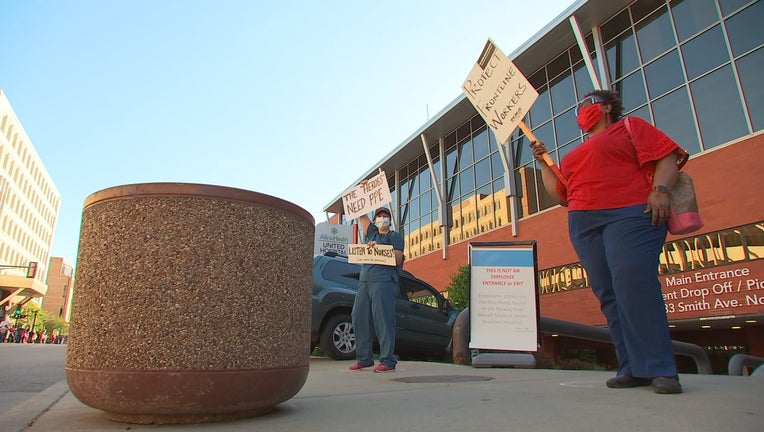 Nurses rallied outside United Hospital in St. Paul and then marched to the Capitol, calling for more PPE. (FOX 9)

ST. PAUL, Minn. (FOX 9) - Nurses rallied outside a St. Paul hospital and marched to the Capitol to speak out about the amount of available personal protective equipment. They say there isn’t enough PPE in order to do their jobs safely amid the COVID-19 pandemic.

The picket and march started around 6 p.m. Wednesday outside of United Hospital, which is about a mile away from the Capitol. Many nurses stood in front of the hospital, saying they don’t have enough N95 masks or gowns, and they are forced to keep reusing the equipment they do have.

Nurses rallied outside a St. Paul hospital and marched to the Capitol to speak out about the amount of available personal protective equipment.

Nurses from United as well as other local hospitals participated in the rally. State authorities have said there is enough PPE for the coming weeks, but nurses told FOX 9 they aren’t seeing it on the frontlines. They say they’re being told to reuse their PPE in ways they don’t feel is safe.

“Coming out here to make our voices heard so you don’t just hear what they’re telling you out there that we have the PPE we need – we don’t!” said Patience Mbonifor, a nurse at United Hospital. “If we had it, I wouldn’t be standing out there before my night shift. So all we need is give us masks and gowns.”

The governor also addressed the PPE concerns in his daily press briefing, saying if our nurses are worried, we all should be worried. He also expressed frustration with the federal supply chain.

“I don’t put these stories out there to complain about things getting picked off, when we do mention one of these it’s because we’re frustrated,” said Governor Tim Walz in a press conference. “We had gowns that were diverted. They’re on the way to us, we ordered them, we had them, someone in federal government steps in and they go elsewhere.”

Officials with Allina Health, which owns United Hospital, say PPE is not an issue unique to Minnesota.

“Minnesota, like many other states, needs more Personal Protective Equipment,” read a statement. “Allina Health follows the guidance of the CDC, MDH and our infection prevention experts on the use and conservation of critical PPE, such as masks, goggles and gowns, and has taken a multi-layered approach to creating safe environments for our patients and caregivers.”

Officials with Allina Health say they have also created an internal dashboard to show PPE supply to staff, trained some employees to mentor others on proper PPE use and made physical changes inside facilities to keep patients and workers safe.