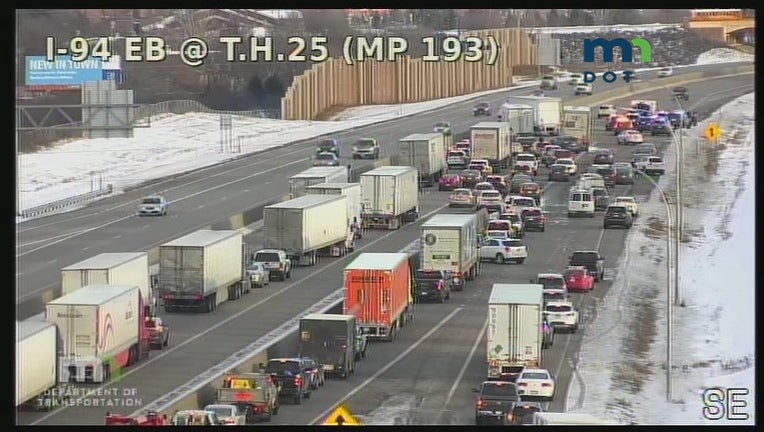 Police block traffic on I-94 near Highway 25 in Monticello, Minnesota.

MONTICELLO, Minn. (FOX 9) - A police chase along I-94 west of the Twin Cities metro on Monday afternoon ended when deputies say a man took his own life.

St. Cloud police say the investigation started around 2:42 p.m. when they were called to a parking lot on the 1000 block of 5th Avenue South for a shooting. At the scene, they found a 20-year-old man with a gunshot wound to his stomach. The victim was taken to St. Cloud Hospital in serious but stable condition.

During the investigation, police say they determined the suspect had left the scene in a vehicle.

With a vehicle description and suspect direction of travel, the Stearns County Sheriff's Office says it spotted a vehicle matching the suspect's description on I-94 near Highway 24 a short time later. Deputies tried to stop the vehicle but say the suspect kept driving, headed east for several miles.

In Monticello, the chase came to an end when the driver hit a spike strip deployed by investigators. No officers fired shots during the chase, deputies say. But, when they approached the vehicle, the sheriff's office reports they found the suspect had apparently shot himself and died from his injuries.