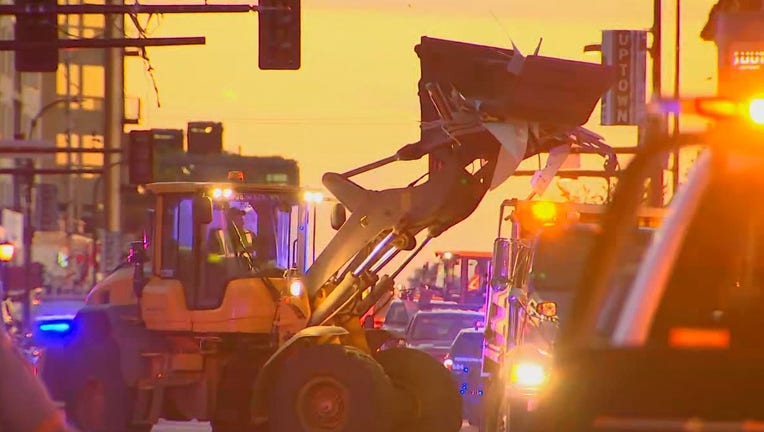 MINNEAPOLIS (FOX 9) - A large group of law enforcement moved into Minneapolis Uptown neighborhood, where protesters had shut down the intersection in response to a deadly law enforcement shooting, and began taking people into custody Tuesday evening. This comes after city officials shared plans to reopen the area to traffic.

A FOX 9 crews on scene saw officers from multiple agencies move in around 8:30 p.m. Tuesday and put up tape around Lake Street between Girard Avenue and Hennepin Avenue. A handful of protesters appeared to be under arrest with cuffed with zipties around their wrists. City crews also loaded up trucks with items placed in the road by protesters to create the makeshift barricades.

In a press conference Tuesday afternoon, Minneapolis Mayor Jacob Frey said arrests would be made if the protest was no longer peaceful in the Uptown area.

"We recognize that peaceful protest and First Amendment speech is extremely essential, not just to the healing process, but to the democratic process and we want to make sure that it’s protected, but we cannot allow the unauthorized closure of streets," said Frey during a press conference Tuesday afternoon.

Lake Street between Girard Avenue and Hennepin Avenue has been closed by protesters in response to the law enforcement shooting death of Winston Smith. Late Sunday evening, a protester died after a man drove into the intersection, an incident which ignited safety concerns.

"It is dangerous to have the street closed off with makeshift barriers. It has been dangerous for both to patrons, to residents, and also to protesters, who we have an obligation [to] make sure the people are indeed safe," said Frey.

Public works crews removed the protester's makeshift barricades Tuesday afternoon, but reporters on scene saw protesters put barriers back in place after crews and police left. City leaders say they have received many calls from businesses and residents in the area, calling for the area to be reopened.

"We’ve done our best in the last couple weeks to remain patient and understanding," said Minneapolis Police Inspector Katie Blackwell of the Fifth Precinct. "We’re very sensitive to the people who need to heal right now and have their voices heard."

Minneapolis City Council President Lisa Bender, a proponent of the defund the police movement, said the effort is a balance between the right to protest and keeping safety on the streets.

"This situation is a perfect example of the shortcomings of relying on a police-only system of safety. Sending police is the only mechanism to support safety after law enforcement harms or kills someone puts everyone, including law enforcement, in an impossible situation," said Bender, whose ward includes Uptown.

Over the last few weeks, the city has also been in the process of fully reopening East 38th Street and Chicago Avenue, where protesters gathered for over a year following the death of George Floyd. Frey said he is "pleased with the progress" at that intersection, but noted differences with the Uptown protest, as Lake Street is a much larger commercial corridor.

"This ongoing occupation of street or an intersection in a way that is counter to access and is simply not safe, that's where we have an obligation to step and in and say no," said Frey.