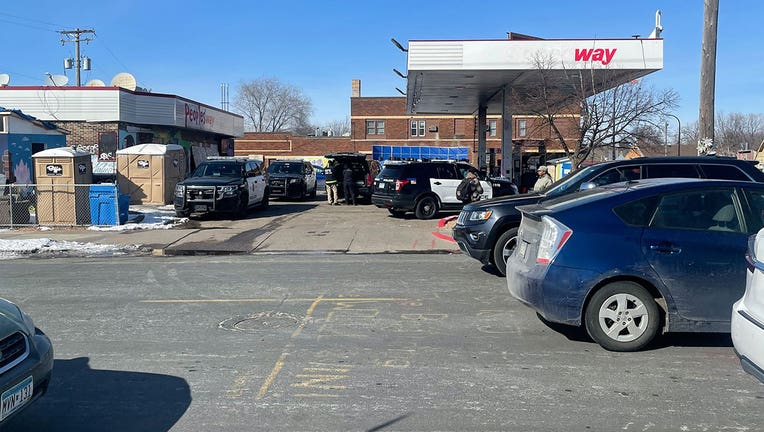 Police investigate at the gas station at 38th and Chicago on March 11. (FOX 9)

MINNEAPOLIS (FOX 9) - A new set of charges detail the disturbing robbery and kidnapping of a man who says three suspects held him captive at the abandoned gas station near George Floyd Square over the course of a night.

Desmond Graham is charged with kidnappings, assault, financial transaction card fraud, and aggravated robbery for the attack that started on March 10 and lasted until the following morning.

The victim in the case told police he was driving in downtown Minneapolis on the night of March 10 when his car began making a strange noise. When he pulled over to check it out, three men approached him, forced him into the backseat, and took his keys.

The three suspects, identified in the charges as Graham, Larry Mosby, and an unknown man, then drove the victim to the abandoned gas station at the corner of 38th and Chicago.

The charges state the victim was forced into the gas station where the suspects assaulted the victim and demanded money from him. The victim told police he was hit with a hammer, screwdriver, and kicked. To prevent him from leaving, the complaint details the victim was placed in a kneeling position and strapped to a piece of furniture.

According to the charges:

"Fearing that he would be killed if he didn't provide money, [the] victim provided his online banking username and password and his debit card and pin to [the suspects]. The unidentified accomplice then left to withdraw money from [the] victim's bank account. Surveillance video and bank records show that at 1:24 a.m., a $1,000 cash withdrawal was made from the victim's account at an ATM located on the 3300 block of Nicollet Avenue S in Minneapolis by the third suspect."

Despite getting the money, the charges state the suspects refused to let the victim go. Later on, police say they forced the victim back into his vehicle and demanded he withdraw more money. The victim was told that, if he complied, he would be let go.

Wearing a mask and hat to hide his injuries, the man went into a bank and withdrew another $1,000. But, despite the promise, the suspects continue to hold him captive, the charges state.

The victim said the suspects continued to drive around Minneapolis and started using drugs. During this time, the victim said Mosby passed out.

According to the complaint, Graham hit Mosby to try and revive him, but he wouldn't wake up. Ultimately, police say, Graham drove back to the gas station and poured alcohol on Mosby and lit him on fire, in an effort to revive him. The effort failed and Graham doused the flames and poured more alcohol on the burns.

At that point, Graham took the victim back to the car. But, when Graham started searching for the car keys, the victim ran away to get help at a nearby grocery store. The grocery store clerk called 911 and some workers spotted Graham – who used to work at the same grocery store.

When police arrived, they say Graham had left the scene, but they found Mosby's body in the gas station.

After being treated for his injuries, police say the victim was able to identify Graham in a photographic lineup. Graham was arrested on Monday, after nearly three weeks on the run.

When speaking with police, officers say Graham said he knew Mosby would hang at the gas station but denied being there on March 10 and denied knowing the other man involved in the incident. But officers say he later changed his story and claimed the victim drove him to a party at the gas station where Mosby had died from an overdose. According to the charges, when police left the interview room, the defendant ripped the "panic button" and thermostat off the wall, thinking they were cameras, then crushed up and snorted a pill.