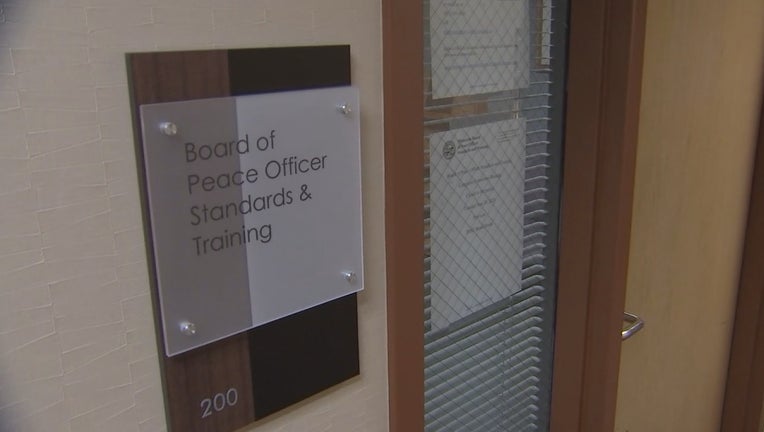 (FOX 9) - In the wake of protests over the police killing of George Floyd, many are asking whether police can really be trusted to police themselves.

The answer may come from a board, little known outside law enforcement, called the Peace Officer Standards and Training, or POST Board.

Changes anticipated for police licensing board in Minnesota

In the wake of protests over the police killing of George Floyd, many are asking whether police can really be trusted to police themselves.

State lawmakers are currently considering a bill that would require the POST Board to revoke the license of an officer who violates use of force policies.

That would be a major departure for board more accustomed to licensing and establishing training standards, than disciplining police officers.

There are more than 11,084 licensed police officers in Minnesota.

But in the last 20 years, the POST Board has revoked the license of only 83 police officers.  And the vast majority of those officers already had criminal felony convictions.

“That is exactly how the rules were written,” said Erik Misselt, the interim director of the POST Board.

“Any license under the U.S. Constitution is a property right, and property right can’t be taken away without due process,” said Misselt.

He said the POST Board is also limited in what it can do by statute.  Under Minnesota law, the board cannot launch independent probes of a police officer’s conduct.  The board doesn’t even have its own investigators.

And unlike the licensing boards for doctors or lawyers, you can’t search a state data base to find details on a police officer’s license or their discipline history.

“I can tell you an officer’s license status, but I can’t tell you who they work for,” said Misselt.

In fact, almost all discipline of police officers happens within their own department through an internal affairs unit, and most discipline happens at the local level.

Over the course of his career with Minneapolis Police, former officer Derek Chauvin was the subject of 17 complaints before the killing of George Floyd.   Only one of those complaints was sustained, and Chauvin received a letter of reprimand.

And that’s not unusual.

In 2018, 48 police officers in Minnesota were investigated for use of force violations, according to statistic maintained by the POST Board.  The majority of those officers, 38, were exonerated.  Only three complaints were sustained.

Likewise, 14 police officers were accused of impartial policing or discriminatory conduct in 2018.  Nine of those officers were exonerated and none of the complaints were upheld.

In the current special session, the legislature is also considering a measure to expand the number of POST Board members, which is mostly made up of career law enforcement, and create a separate community advisory board.

Misselt said the POST Board would eventually approach lawmakers with its own ideas for police reform.

“I know everyone is asking for time and patience,” said Misselt.  “It’s been a whirlwind and we are doing our best.”