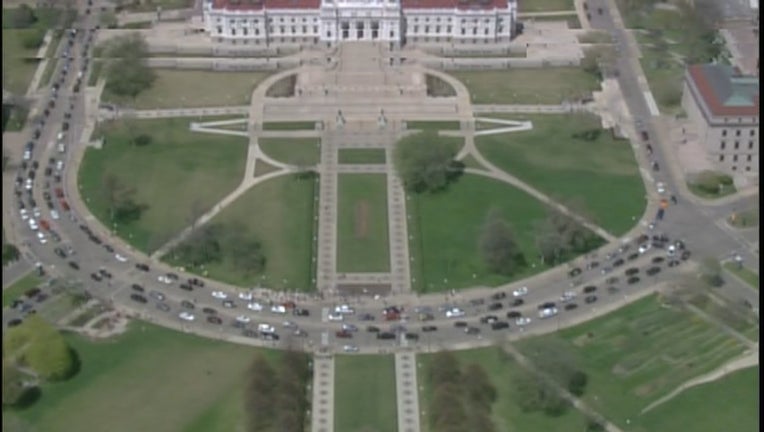 ST. PAUL, Minn. (FOX 9) - Protesters gathered in cars, trucks, and other vehicles on Saturday around Minnesota's capitol as part of a protest, calling on Governor Tim Walz to end his stay-at-home order.

The rally, called "Operation Gridlock Minnesota," was organized through a Facebook page and called on people to honk horns, bring signs, and paint cars to show their support for ending the stay-at-home order.

Meanwhile, nurses and other health care workers stood outside nearby buildings to counter-protest "Operation Gridlock Minnesota."

This past week, Governor Walz extended the order by two more weeks, lasting until May 18.

However, at the same time, the governor did relax the restrictions, allowing more businesses to reopen on Monday -- the day the order was supposed to expire.

While some states have begun resuming business as normal, Governor Walz has urged for a measured reopen for Minnesota to prevent a spike in cases. Walz fears that without smart restrictions, COVID-19 would spread rapidly in Minnesota, threatening to overload hospitals and resources.

In the Facebook call to action, however, protesters argued against Walz's methods, saying too many Minnesotans have already been impacted economically by the shutdown, losing jobs and businesses.

Governor Walz did say this week that further changes could be made between May 4 and May 18 for Minnesota if COVID-19 spread shows signs of slowing. The governor is urging citizens to do their part to prevent the spread by following social distancing rules, avoiding crowds and gatherings, and wearing a mask in public situations.