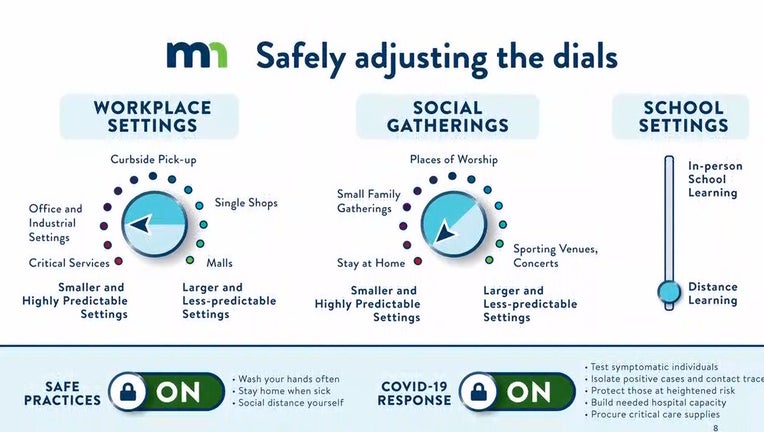 (FOX 9) - There was a bit of welcome news for businesses hoping to get employees back to work as Governor Walz opened up a little more this week on his plans to slowly open up the economy.

But, the governor warns the process will look a lot more like slowly turning a dial versus flipping a switch.

There was a bit of welcome news for businesses hoping to get employees back to work this week as Governor Walz opened up a little more this week on his plans to slowly open up the economy.

With more testing and more identification, officials say they'll be able to better track and monitor the spread of COVID-19. But this return is not as black and white as a switch on and off.

It's like the power of your stove - high, medium, low, and everywhere in between - with the ability to go up or back as needed.

If Governor Walz has made one thing clear over the last couple of days, it’s that our return to normal is not going to be easy.

"We have to quit thinking about this, that someone is going to say something and flick a switch," explained Walz.

"I think we have to acclimate ourselves to the fact that this is that continuum, and this is that dial turning," he said. "This is the dial turning as we go back, and the dial is going to at times move in both directions, so I want to be clear about that.”

And there isn't just one dial. Walz says he is monitoring three separate situations, workplaces, social settings, and schools, and adjusting them as needed.

"It's going to be a long haul and I think for all of us to understand," he said. "And in that long haul we're going to have to strike that balance between keeping people healthy, safe, and happy."

Right now, Governor Walz says he believes it is safe to open offices and industrial workplaces starting Monday. But, he says, they can’t make the turn up to single shops just yet.

"Those smaller business, single shops," he said. "Those are on the dial right up from where we’re at, so that should be an expectation. So were thinking about that and talking about that with them."

The social-setting dial is still turned toward staying at home because, at this time, officials believe turning it would negatively impact any progress we’ve made.

"Those who say you flick the switch, were not going to peg out to the right," he explained. "Because no matter how much you wish that would be a good thing, we know the virus would skyrocket and we would lose the lives that have so far protected."