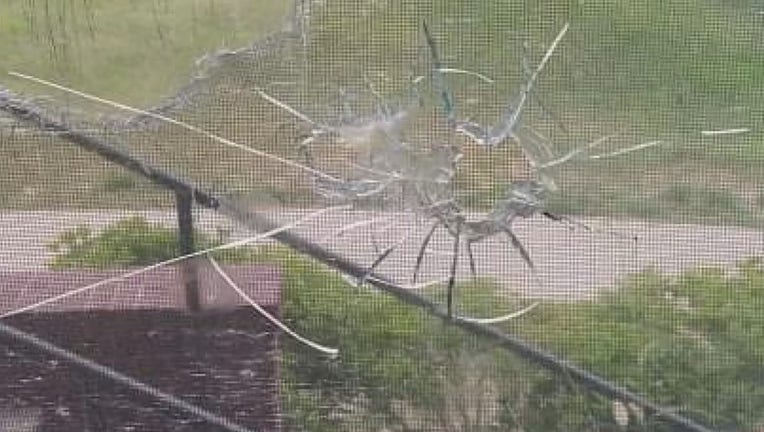 A bullet left a hole in a window of Courtney Bailey's apartment in the Harrison neighborhood of north Minneapolis. (Supplied)

MINNEAPOLIS (FOX 9) - A gun fight in the Harrison neighborhood of north Minneapolis sent a bullet through the window of an apartment, nearly hitting a five-year-old boy Sunday afternoon.

Courtney Bailey says her children are lucky to be physically unharmed today, but she says she is sick and tired of the gun violence.

A bullet from a shooting in north Minneapolis narrowly missed children, sparking outrage from the family and community.

"I don’t know how to feel right now," said Courtney Bailey. "All I know is that people always say bullets don’t have a name, but the person pulling the trigger does."

At a press conference Monday, Bailey shared her frustrations as she recounted the harrowing moments that still weigh heavy on her children. She just wants her kids to grow up without the constant fear that they’ll be shot.

"Now I have to deal with tossing and turning last night, holding my five-year-old son as he screamed and screamed and wouldn’t go to bed," said Bailey.

Bailey was inside her apartment Sunday afternoon making her three kids something to eat when gunfire erupted outside. One of the bullets flew through the window and narrowly missed her youngest son.

"My five-year-old was at the window facing, my eight-year-old was behind him," said Bailey. "He said, ‘Get down’ and as he pulled his brother and I’m reaching for him, the bullet came through shattered glass across his face."

Police confirm the shooting, which broke out at the Penwood Market in the Harrison neighborhood just outside the family’s window.

Initial reports said two people were injured, one critically, and that no one was in custody.

The shooting marked one of many in Minneapolis over the weekend. In just three days, Minneapolis police reported 16 shooting victims - three of which were killed. Most of the incidents happened on the city’s north side.