A Brooklyn Park man is sharing his incredible story of survival with FOX 9 after he was shot in the main artery of his leg, and used his own belt as a tourniquet to survive.

BROOKLYN PARK, Minn. (FOX 9) - A Brooklyn Park man is sharing his incredible story of survival with FOX 9 after he was shot in the main artery of his leg Thursday morning, Feb. 24.

Scott Rupp used his own belt as a tourniquet and called 911 before emergency responders arrived, all this while gunfire was continuing.

Rupp cannot recall exactly how the shooting and its scary aftermath unfolded in his townhome complex, but is so grateful that he will soon be able to walk out of the hospital, alive.

"I am not 100 percent sure," Rupp told Blume. "Things were starting to get a little fuzzy from all the blood loss at that point. I don’t think everything has quite sunk in yet."
Rupp was in his condo in the 6600 block of 83rd court when gunfire erupted.

Apparently his neighbor just opened fire, blasting rounds everywhere – up, down, through windows and walls including the one Rupp shared with him.

Rupp was at his computer with headsets on and did not hear the initial rounds. But when he stood up to investigate, a slug tore straight into his leg, striking his femoral artery. 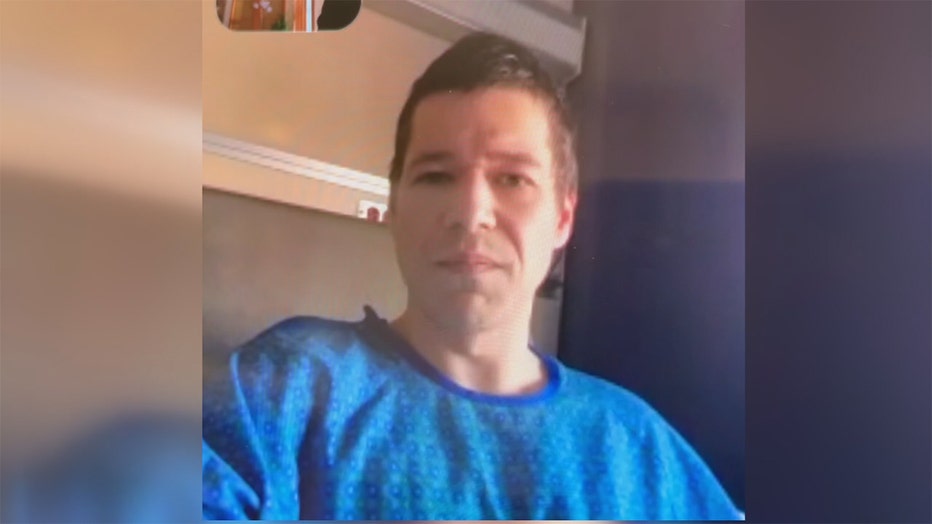 A Brooklyn Park man is sharing his incredible story of survival with FOX 9 after he was shot in the main artery of his leg, and used his own belt as a tourniquet to survive.

He reported that blood began spurting everywhere. The 29-year old grabbed a belt as a tourniquet to try to stop the bleeding while calling for help.

He said, he owes this quick thinking in a life-and-death situation to his passion for military war history.

"I know tourniquets have been used for centuries as battlefield medical treatment. I really think that is what really gave me that push to grab my belt and get that around my leg as tight as you can," Rupp said.

Emergency responders would also apply life-saving pressure to the wound before rushing Rupp to the hospital.

Officers eventually caught up with the alleged gunman who goes by two different identifies – Terry Johnson and Bryan Morgan – after a brief pursuit following the shooting. Authorities estimated that he fired some 40 rounds with at least five condo units and homes damaged in the gunfire.

The chase of the suspect ended in a violent crash with a pair of Brooklyn Park police squads.

A chaotic and dangerous scene playing out in Brooklyn Park on Thursday morning, with dozens of shots fired in a townhome complex with one neighbor critically injured when a bullet tore into his home.

The suspect was in court Monday where his bail was set at $100,000 with conditions, $175,000 without conditions. Meantime, Rupp was waiting for his hospital discharge papers that he said, amazingly, might come at any moment.
"I think it is a bit bizarre how widespread everything is; it’s nuts. Just a crazy situation through and through," said Rupp.