A chaotic and dangerous scene playing out in Brooklyn Park on Thursday morning, with dozens of shots fired in a townhome complex with one neighbor critically injured when a bullet tore into his home.

BROOKLYN PARK, Minn. (FOX 9) - FOX 9 has obtained dramatic squad dash camera video of a fleeing shooting suspect barreling into a pair of Brooklyn Park police vehicles Thursday morning. Another angle shows the perspective of the pursuing officer when the violent impact occurred. The net result was two cops with concussions, they were treated at area hospitals and released, as well as the gunman in custody after a short standoff at gunpoint.

Bruley insists, he is proud of his team for safely apprehending the suspect without others being hurt, "I think what you see on this video here is another example of what police are doing every day in our community. These are the untold stories to be honest with you."

As for the shooting itself, FOX 9 was on scene a day later to document the chaos in the 6600 block of 83rd Court. The suspect, was firing indiscriminately, some 40 rounds upstairs and downstairs, with rounds penetrating at least five different condos and homes.

"I got it from the bathroom. From the wall, right behind the door in the bathroom," neighbor Sumo Weeks said while holding one of the crushed slugs. Weeks shares a wall with the suspect. 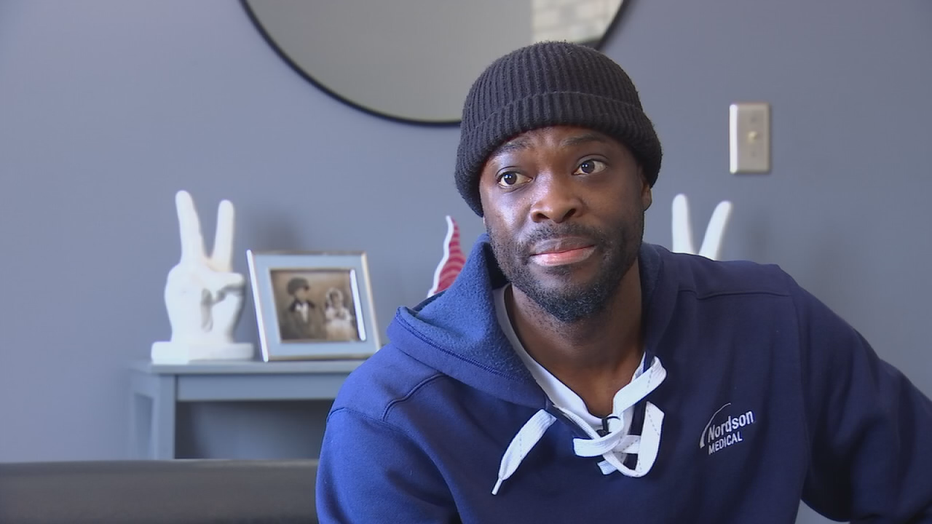 So far, Weeks has found three bullets that tore into his condo, including one right through the frame of his main bathroom mirror.

With the shooting happening at about 8:30 in the morning, he is just grateful no one was standing at the sink.

"In your chest. If someone is in the bathroom at the time that happened. (They would be) stuck in the chest with a bullet. That’s crazy," he told FOX 9’s Paul Blume.

Another neighbor wasn’t so lucky. He was injured, shot in the femoral artery in his leg. Responding officers were credited with helping save his life, applying multiple tourniquets. His family said, the 29-year-old victim is expected to survive though he was in the Intensive Care Unit on Friday.

As for the suspect, 45-year-old Terry Johnson, he fled the initial scene by reversing straight out of his own garage, splintering the door as police arrived. Johnson is in the Hennepin County Jail, now charged with several counts related to the shooting including assault.

Prosecutors writing that they intend to see an upward durational departure "as this case is more serious than other similarly situated offenses of possession of a pistol by an ineligible person, namely because Defandant discharged the weapon endangering the safety of other and because he actually injured another individual while illegally possessing the weapon."

Deputy Chief Bruley reports Johnson has a violent, volatile history and should never have been released from custody in the past, and never should been allowed to possess a gun.

"This is all too common for us," Bruley explained. "The rise in violence we see in the community over last 18 months, all too often, we seeing suspects with multiple felonies out on probation or parole. Again and again, victimizing our community."

Johnson is set to make his first court appearance in the case on Monday, February 28th. His preliminary bail has been set at $175,000.