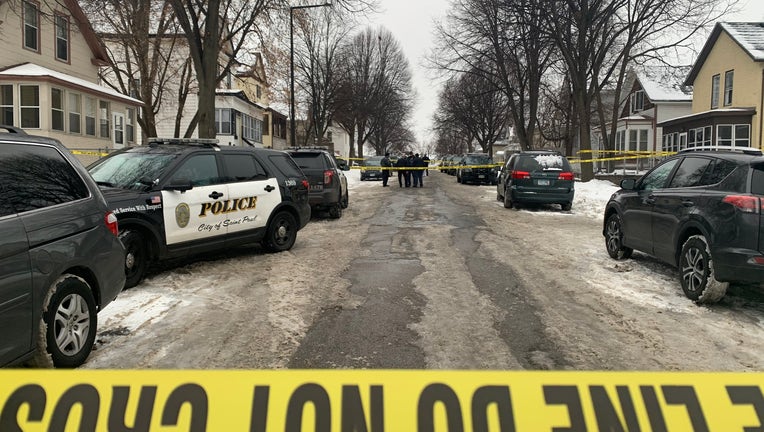 Police block of Jessie Street in St. Paul after a deadly shooting on Saturday, January 30, 2021. (FOX 9)

ST. PAUL, Minn. (FOX 9) - Police say a child and a teen were among three people killed in a shooting on Saturday at a home in St. Paul that officers had been to an hour before shots were fired.

According to police, officers responded around 3 p.m. to assist paramedics on an emergency call on the 700 block of Jessie Street. When police got to the scene, the people who had called 911 met with officers and frantically told them people were injured inside the home.

A child and teen are among three people killed on Saturday during a shooting at a home in St. Paul...

Inside, police found three victims who had been shot: a woman in her 30s, a girl in her early teens, and a boy between the ages of 8 and 12.

Officers cleared in paramedics who pronounced the woman and teen dead and rushed the young boy to the hospital where he was later pronounced dead.

Police say officers had been to home about an hour before the shooting for a welfare check. According to police spokesperson Sgt. Mike Ernster, a relative had called the police department to check on a woman at the home.

Two people are dead and a third person is hurt after a Saturday afternoon shooting in St. Paul, Minnesota.

"He was called here by a concerned family member from out of state who wanted us to check on the welfare of the supposed victim in this home," said Sgt. Ernster. "Our officer did come here, he did speak with her at the door and explained why he was there."

"She looked at him and said, 'I'm okay, tell them I'm okay,'" explained Sgt. Ernster.

Sgt. Ernster says the officer offered to let the woman use his phone to call her family member in Tennesee but the woman said no.

Right now, the circumstances leading up to the shooting are unclear, as well as who fired the shots that killed the three victims.

Investigators are now speaking with people and trying to determine what happened.