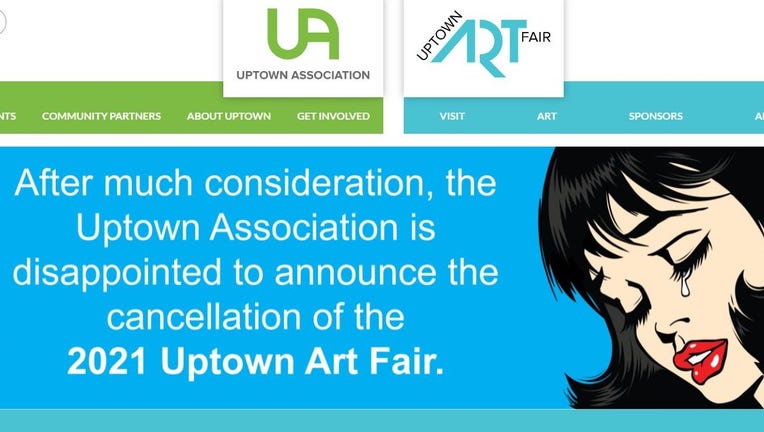 The Uptown Association announced the cancellation of the 2021 Uptown Art Fair.

MINNEAPOLIS (FOX 9) - The Uptown Art Fair will not be held for a second year in a row due to "unanticipated challenges," according to a statement released Tuesday by the Uptown Association.

Last year the event, which is typically centered around Lake Street and Hennepin Avenue, was canceled due to the COVID-19 pandemic and was slated to return August 6 – 8, 2021. However, according to the statement, organizers were unable to overcome "events that are beyond our control."

Organizers say the Uptown Art Fair in Minneapolis is canceled this year due to unexpected challenges.

"Multiple options were considered and planned, including moving the event to an alternate location a few blocks away to showcase the greater Uptown community," read the statement. "However, despite our collective best effort, we were unable to reach a consensus among the many stakeholders it takes to successfully put on an event of this size and scope. Because of multiple evolving issues and the logistics of a large-scale event, it was not executable."

Jill Osiecki, the executive director of the Uptown Art Fair, told FOX 9 that security concerns are among the issues organizers faced. Osiecki said the event typically draws about 300,000 people to Lake Street and Hennepin Avenue, an area which she said has become more "volatile."

There have been protests and gatherings near Lake Street and Girard since Winston Smith was fatally shot by deputies in an Uptown parking garage last month. At times, protesters have shut down the intersection and surrounding area to traffic for demonstrations. While largely peaceful, some protesters have set dumpsters on fire and vandalized nearby businesses. Last month a protester, Deona Marie Erickson, died when a driver drove through a barrier and hit her.

Steve Taylor, an Uptown business owner who is outspoken about crime issues, says he understands the decision to cancel based on incidents he has witnessed.

"You know, almost consistent fires, vandalism, looting," said Taylor. "Just last night, we had people trying to set fire to a neighborhood restaurant, and closed down Lake and Lagoon again at 3 a.m."

For Minneapolis artist Nicole Houff, the Uptown Art Fair is big business, so when news of the cancellation came, she was devastated.

"You know, the dynamics are so complicated right now, I do not envy the Uptown Association," said Houff. "It is really hard. Our community is in a lot of pain and you have to consider every single angle."

In response to the cancellation, Minneapolis Mayor Jacob Frey called on the city to support local artists.

"Amid the challenges of the past year, Minneapolis artists have been both a beacon of hope and a backbone of strength throughout our city, building culture and community across every neighborhood," said Mayor Jacob Frey in a statement. "The arts community is also incredibly resilient and while the Uptown Art Fair – a hallmark of summer in Minneapolis – won’t return in its traditional form this year, it is more important than ever that we as a community continue strongly supporting local artists who have stepped up to support residents, amplify calls for racial justice, and help tell our city’s story to the nation and world."