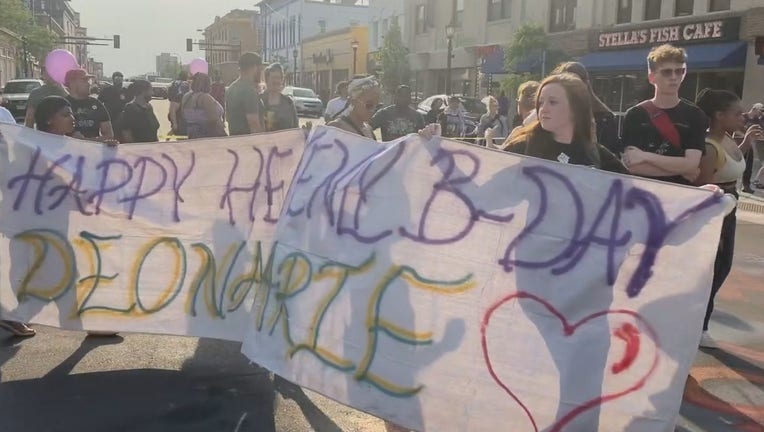 MINNEAPOLIS (FOX 9) - At the intersection where she was fatally hit by a vehicle, activists held a vigil for Deona Marie Erickson on what would have been her 32nd birthday.

Wednesday night, demonstrators held a march and rally in the Minneapolis' Uptown neighborhood. People brought flowers, candles and balloons to honor Erickson. While peaceful, the group blocked off Lake Street between Girard Avenue and Hennepin Avenue.

At the intersection where she was fatally hit by a vehicle, activists held a vigil for Deona Marie Erickson on what would have been her 32nd birthday.

City leaders, including Mayor Jacob Frey, have said they want to reopen the street, which is a large commercial corridor in Uptown. At the city's request, Governor Tim Walz gave the Minnesota National Guard a warning order to prepare to assist law enforcement, if needed.

Nicholas Kraus, who police say was the driver in the deadly crash, was charged with second-degree intentional murder and two counts of second-degree assault.

Late Sunday night, Erickson was among a group of protesters calling for transparency in the law enforcement shooting of Winston Smith. Protesters had set up makeshift barricades, including vehicles, to block off the Lake Street from traffic.

According to the charges, Kraus told police he thought he needed to accelerate his vehicle in order to "jump" the barricade. Kraus has a history of DWIs. His blood results in this case are still pending.