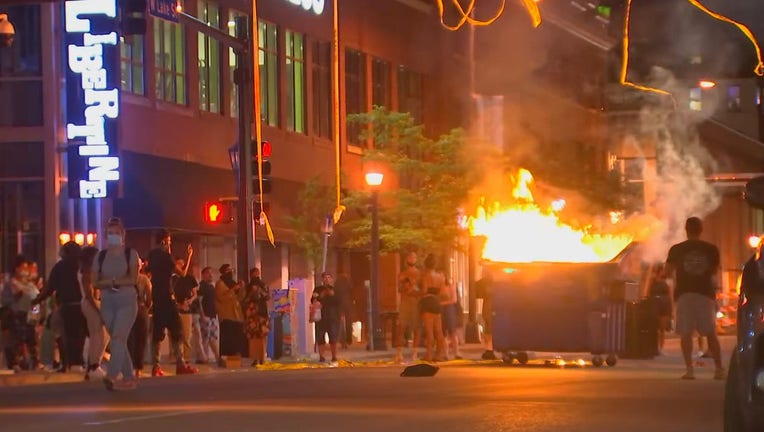 A dumpster fire burns on Lake Street near the parking garage where a deadly law enforcement shooting occurred in Minneapolis on June 3, 2021. (FOX 9)

Thursday around 2:10 p.m., a U.S. Marshal Service (USMS) taskforce made up of local law enforcement officers were trying to arrest a person wanted on a state arrest warrant for possession of a firearm by a felon, according to a USMS statement.

According to USMS, the person was in a parked car, did not follow commands and took out a handgun. In response, members of the taskforce fired shots and the person died at the scene.

Following the shooting, a crowd of protesters began to gather near the parking garage in the 1400 block of Lake Street. By 9:30 p.m. law enforcement providing security had left the area. Around 10:10 p.m. the dumpster was lit on fire at the intersection of Lake Street and Girard Avenue S.

After the dumpster burned, people continued to add other items, like garbage cans to keep the fire burning. 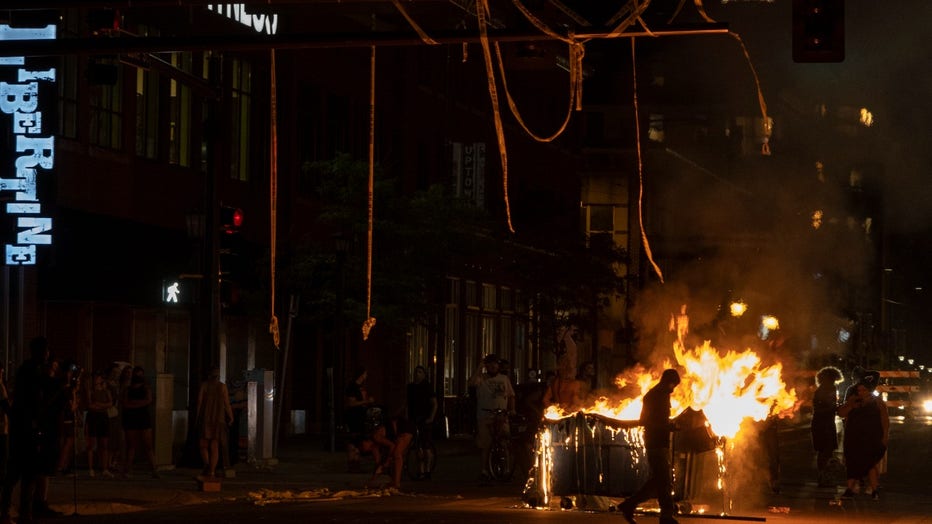 A dumpster was set on fire at Lake Street and Girard Avenue S following a deadly law enforcement shooting in Minneapolis on June 3, 2021.

A crowd of a few dozen is gathered in the intersection while a barricade was in place at Lake Street and Hennepin Avenue.

Around midnight, Minneapolis police officers returned to the area and formed a line and used flash bangs to move the remaining group of people down Lake Street several blocks. Our photographer saw firefighters extinguish the remaining flames from the fire as well as glass broken at a Target store nearby.

Minneapolis firefighters extinguished a dumpster fire lit by protesters following a deadly law enforcement shooting at a parking garage in the Uptown area.

Numerous buildings were vandalized and several were looted overnight. Police made multiple arrests, but so far totals have not been announced.

Law enforcement sources told FOX 9 the person who died was a murder suspect, but FOX 9 has since learned this information was not accurate.