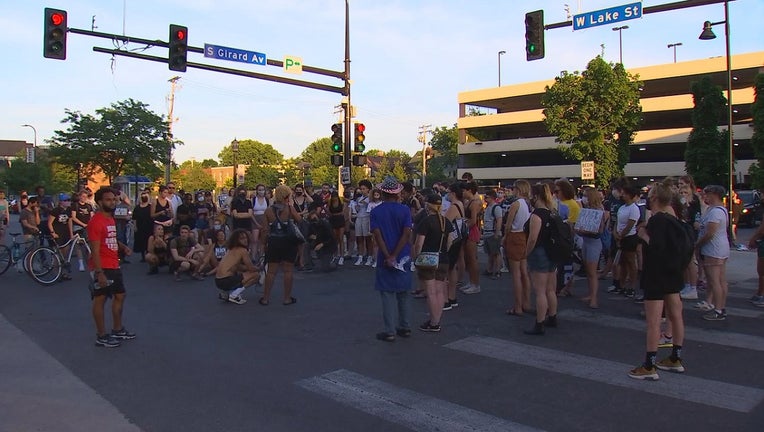 Protesters took to Lake Street for a fourth night on Sunday following the shooting of Winston Smith by law enforcement. (FOX 9)

MINNEAPOLIS (FOX 9) - For the fourth night in a row, marchers took to the streets of Minneapolis' Uptown neighborhood as protesters rally against the shooting of Winston Smith by law enforcement.

Rallygoers gathered along Lake Street near Girard Avenue, near the parking ramp where Smith was killed, as part of a protest at 7 p.m.

The group moved down Lake Street and around the block before being moved back onto the sidewalk by a brigade of Minneapolis police officers. The march then turned into a temproraily standoff with protesters on the sidewalk while police kept the street clear for traffic on Lake.

Around 10:15 p.m., the protest group went back on the move to march down side streets in the neighborhood.

Sunday's rally followed a mostly peaceful night on Saturday after two straight nights of arrests on Thursday and Friday.

Winston Boogie Smith, as identified by family and friends, was shot by a Ramsey County deputy and a Hennepin County deputy during an encounter on the top floor of the parking garage in the 1400 block of Lake Street Thursday afternoon, according to the Minnesota Bureau of Criminal Apprehension. A U.S. Marshals Fugitive Task Force was attempting to arrest Smith, 32, for a warrant on a felony firearms violation when the incident occurred.

BCA investigators say there is evidence showing that Smith fired his gun from inside the vehicle and spent casings were found on the driver's side. However, there is no body camera footage or squad dash cam footage of the incident. The BCA says members of the task force weren't allowed to wear body cameras – despite a change in policy at the federal level allowing for the use of the cameras by officers and deputies on a task force.

At the same time, social media postings seem to show Smith was prepared for a confrontation with police.