EAGAN, Minn. (FOX 9) - Approximately 10,000 people who were scheduled to receive their COVID-19 vaccine at the Minnesota Vikings practice facility in Eagan this week will now get their shot at U.S. Bank Stadium after the practice facility suffered storm damage.

The roof on the indoor practice field at Twin Cities Orthopedics Performance Center, which is where the vaccinations were set to occur, was damaged during Monday's storms, according to a Minnesota Department of Health spokesperson. As a result, 2,500 vaccine appointments scheduled for Wednesday were postponed. 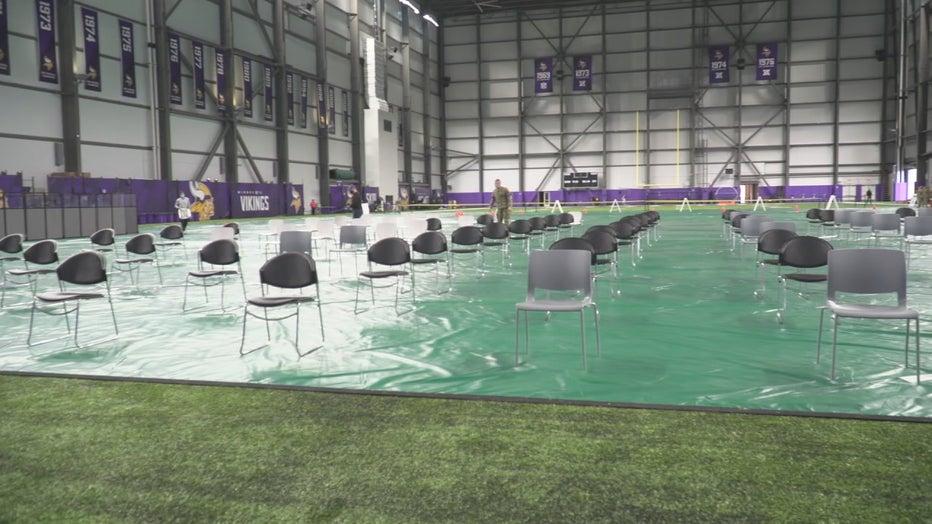 Crew sets up chairs before starting a COVID-19 vaccination clinic at the Minnesota Vikings' TCO Performance Center in Eagan. (FOX 9)

"Everyone’s appointment will be honored," Gov. Walz said at a news conference on Wednesday. "Everyone will get it on time, they’ll be just told to move over to U.S. Bank Stadium."

TCO Performance Center was serving as one of the state's temporary Community Vaccination Program sites. The site is administering the single dose Johnson & Johnson vaccine.