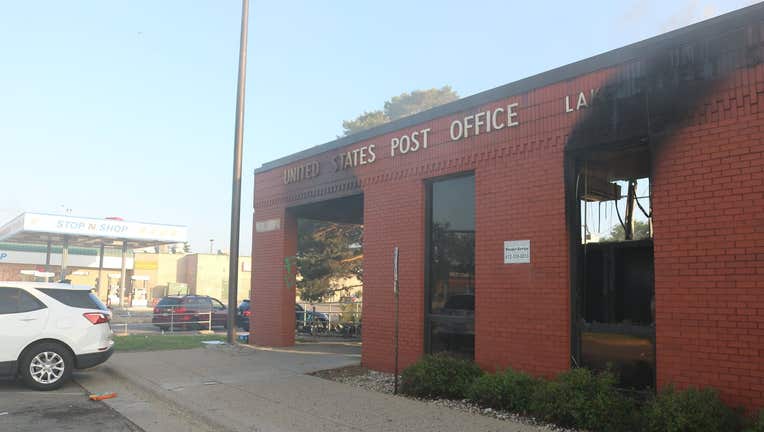 A post office was set on fire Friday night in south Minneapolis during the riots.

(FOX 9) - The United States Postal Inspection Service has announced a $10,000 reward for information leading to arrests for the people responsible for destroying post offices in Minneapolis during riots following the death of George Floyd.

Three post offices, located at 3033 27th Ave South, 3045 Bloomington Avenue, and 110 East 31st Street, were damaged during unrest in Minneapolis between May 28 and May 30. The USPS Inspection Service asks that if you know the people responsible the arsons, burglaries, and thefts that you contact them at 1-877-876-2455.

Dozens of postal workers gathered at the Lake Street post office just days after it burned to stand in solidarity with the movement to bring justice for George Floyd.

"In the past, the labor movement formed an alliance with the civil rights movement," explained one speaker. "Because, yes, this about fighting police violence. Yes, this about winning justice for George Floyd. But it is and always has been about more than that. This is about an entire system of oppression and exploitation."

Dozens of postal workers came together on Sunday, standing in solidarity with the movement to bring justice for George Floyd

The Bureau of Alcohol, Tobacco, Firearms and Explosives is offering a total of $70,000 in reward money for information leading to the arrest of a number suspects wanted in connection with fires in the Twin Cities that were set during the unrest. ATF is assisting local investigators in tracking down the suspects in 135 fires that were set in Minneapolis and St. Paul.

The ATF is offering a reward for tips involving the arson cases in Minneapolis and St. Paul that followed the death of George Floyd.

“We have a systematically and methodically worked each of these fire scenes, processing the scene, interviewing witnesses, reviewing information that’s been provided by the public already, video footage that’s been provided, in order to identify those individuals that are engaged in misconduct and collect evidence in relation to each of these cases,” said Terry Henderson, the ATF Special Agent in Charge.