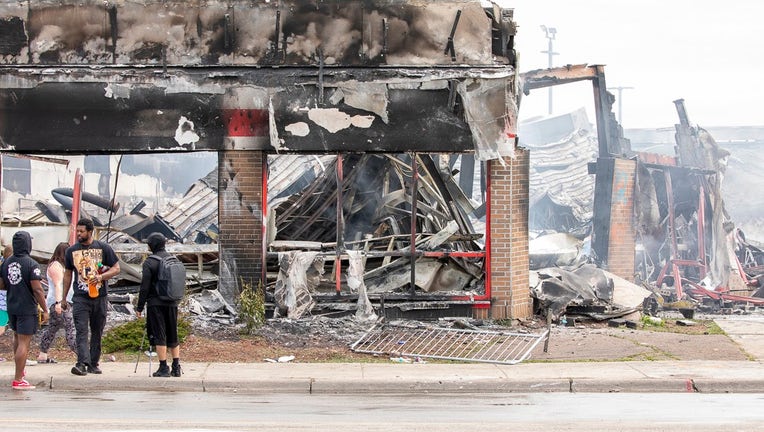 A south Minneapolis building is all but destroyed after protests turned violent and people began setting fires. (Rebecca J. Loose)

(FOX 9) - Federal investigators are looking into 135 fires set at businesses over the past week during riots in the Twin Cities in the aftermath of George Floyd's death.

An ATF spokesperson says the agency is assisting local investigators in Minneapolis track down suspects in 100 business fires there.

In St. Paul, ATF investigators are working with federal, state, and local crews to investigate 35 fires at businesses.

“The cause of these fires is quite obvious,” said Special Agent in Charge William Henderson with the St. Paul Field Division in a statement. “The task at hand now is to determine who is responsible. ATF’s National Response Team is going to be a tremendous asset. It brings a wealth of knowledge and resources to assist local police and fire departments in large-scale fire investigations.”

Unrest in the aftermath of Floyd's death led to massive protests that turned violent in some cases. In both cities, looters hit stores and other businesses and fires broke out at multiple sites, particularly along Lake Street in Minneapolis and University Avenue in St. Paul.

Over the past week, Minnesota leaders said they suspected outside agitators might be exploiting the unrest to cause mayhem. Monday, an Illinois man was charged by federal investigators accused of handing out explosives during the riots in Minneapolis.