Monday's forecast: Sunny with highs in the lower 70s

More sun tomorrow with highs in the mid-60s.

(FOX 9) - It was a truly phenomenal weekend with glorious sunshine, low humidity, and just a little bit of a breeze. But that was coming off a wild week with several rounds of severe weather along with heavy rain. Well, that heavy rain is now taking its toll on area waterways with many creeks, streams and rivers now around or above flood stage.

This is not something we experienced much of in 2021, thanks to the hot and dry conditions. But it looks like some high water is in the cards for at least the next couple of weeks. 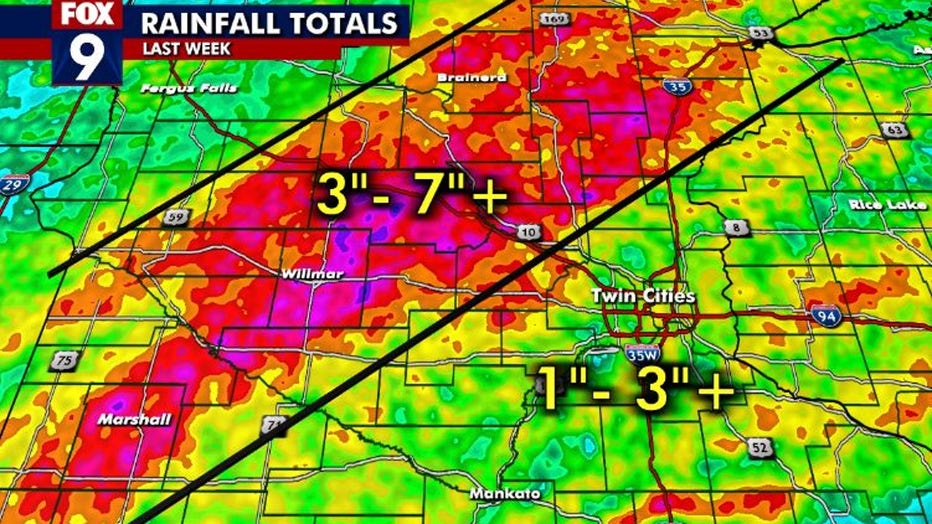 The months of May, June and July are the wettest three of the year here in Minnesota. Most locations average more than an inch of rain a week between now and just after Independence Day. So heavy rain is commonplace. But the last week has brought way more than what's "typical" for some of us.

While the Twin Cities received a couple of inches of water, it wasn't all that much in the grand scheme of things. In fact, so far this month we're sitting right around our average. But for a swath west and north of the metro, it was a much different story. Several rounds of rain produced widespread amounts of 3-7 inches, with local spots up to 10 inches. That's a couple of months' worth of rain in just about a week's time. This is the main reason water levels have risen so much in many areas. 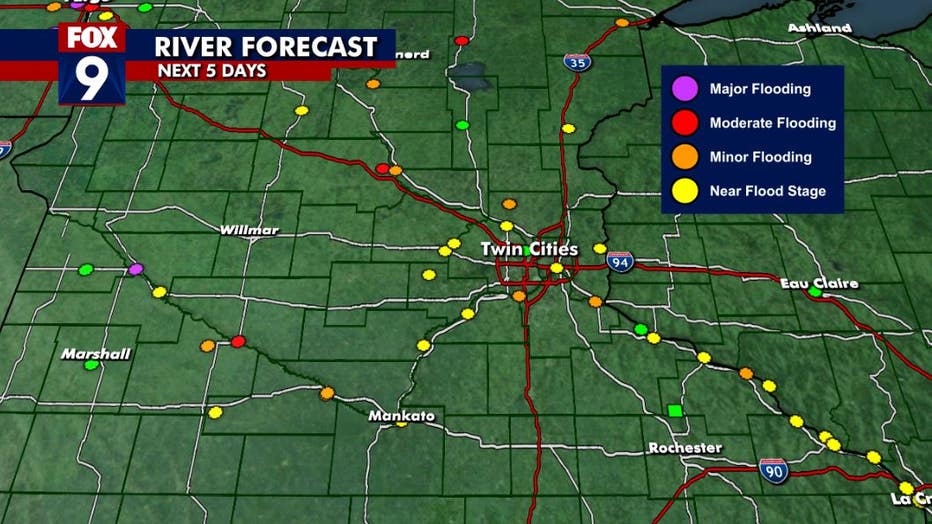 Red, orange and pink circles on the map show rivers that are above flood stage.

River levels are shown in specific points because this is where the National Weather Service has a river level gauge. Any circle that's orange, red, or pink shows that the location is above flood stage. Red indicates moderate flooding and pink shows major flooding. Any yellow circle shows that location along the river to be near flood stage. 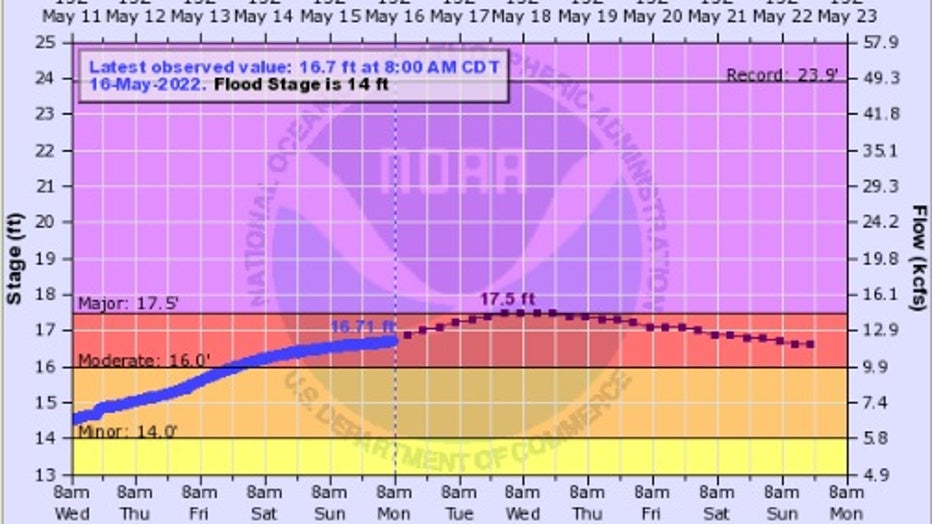 The graphic shows the expected peak river level of the Min\nesota River around Montevideo over the next five days. (FOX 9)

The map above shows the expected peak river levels at these points over the next five days, with many locations expected to see at least some minor flooding. Major flooding though is likely along the Minnesota River around Montevideo. 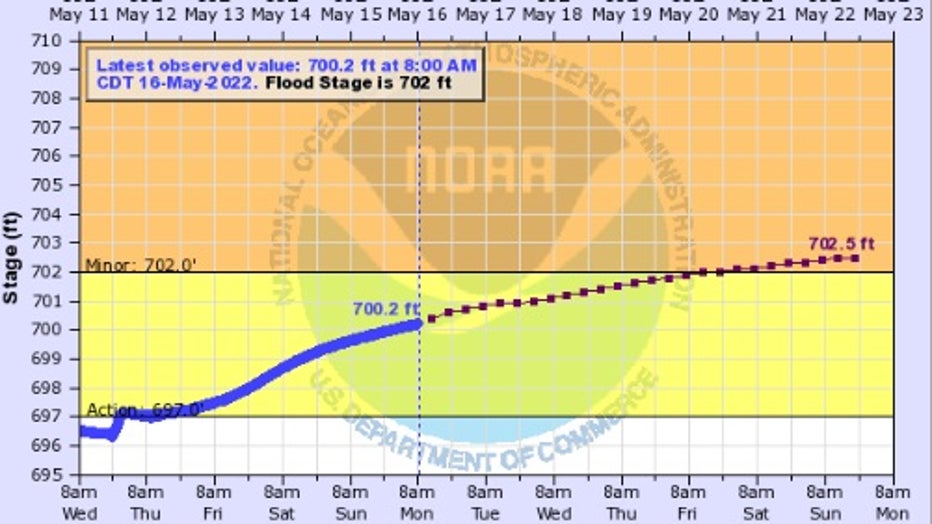 The graphic shows the expected peak river level of the river around Savage over the next five days. (FOX 9)

Farther downstream, the river isn't quite as high compared to flood level, especially when you get to Mankato. But by the time the Minnesota River begins to approach the Mississippi River in St Paul, it starts to swell. The river is likely to get above flood stage in the south metro in Savage by this upcoming weekend. While this has become commonplace over the last several years, some trail closures along the river are likely. 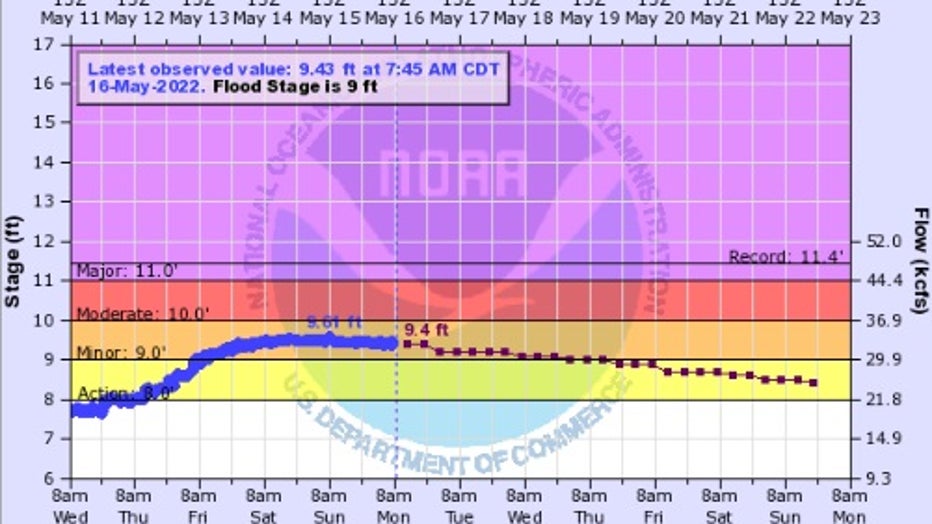 The graphic shows the expected peak river level of the Mississippi River around St. Cloud over the next five days.

The Mississippi River is also quite high, starting from the headwaters all the way to the Twin Cities. In St. Cloud, the river is hovering above flood stage and will likely continue to be high for at least the next several days. The Mississippi, though, spreads out a bit as it rolls toward the Twin Cities, so it's not likely to be quite as high around the metro.

However, it will be real close to flood stage by the weekend, which is why there will be some scattered road closures going into the weekend, especially in downtown St Paul. 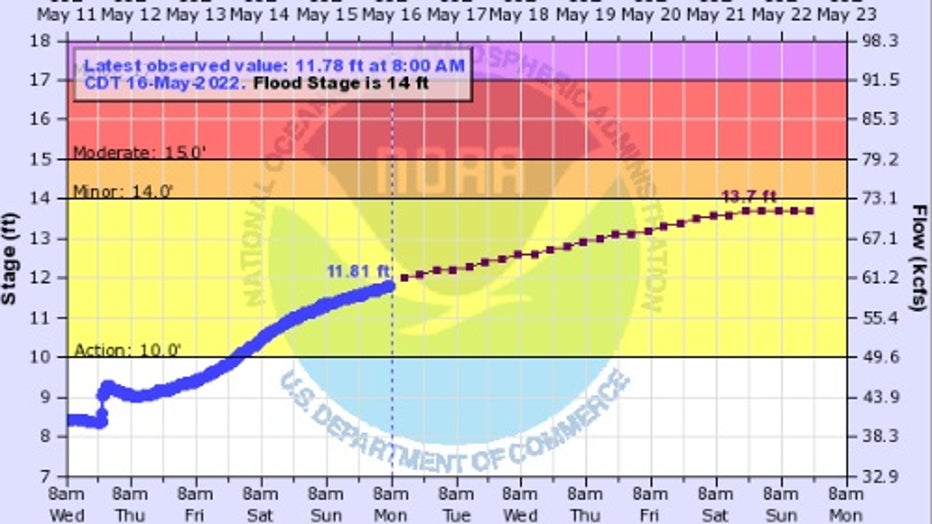 The graphic shows the expected peak river level of the Mississippi River around St. Paul over the next five days.

Like all things weather-related, this forecast is heavily based on not only what we've already received, but what is expected for the next several days. So, what happens next will affect these forecasts. The good news is, while some scattered rains will be possible this week, widespread heavy rain is not likely.