(FOX 9) - Don’t let our limited showers on Thursday fool you: it’s dry. We’re talking crop failing, tree killing, grass baking dry. Dry enough that it’s actually been wetter in many parts of the desert Southwest U.S. In fact, Death Valley, California (one of the hottest and driest places on the planet) received more rain in June and July than some parts of Minnesota, including the Twin Cities. 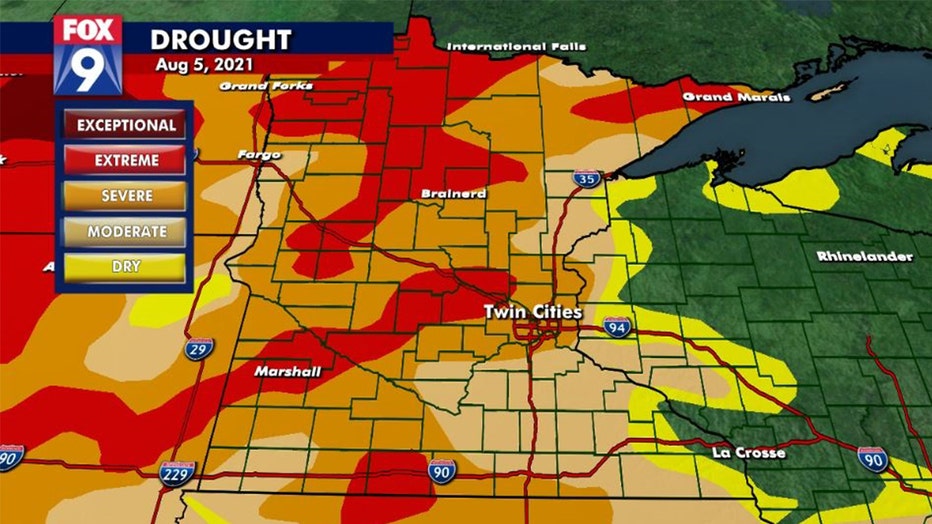 The new drought monitor is out and conditions continue to slowly get worse. Extreme drought category jumps 14% and now over one third of the state is considered to be in extreme drought including parts of the northwest metro.  (FOX 9)

Many of us have seen the drought monitor over the last few weeks with the basic knowledge confirming that it’s dry. Oranges and reds on that map are not good news, indicating that it’s very dry. This week, the extreme drought expanded another 14% and now more than a third of Minnesota is considered to be in an extreme drought. But, just how dry is extremely dry? Well, we can further quantify that by turning to a soil moisture map. 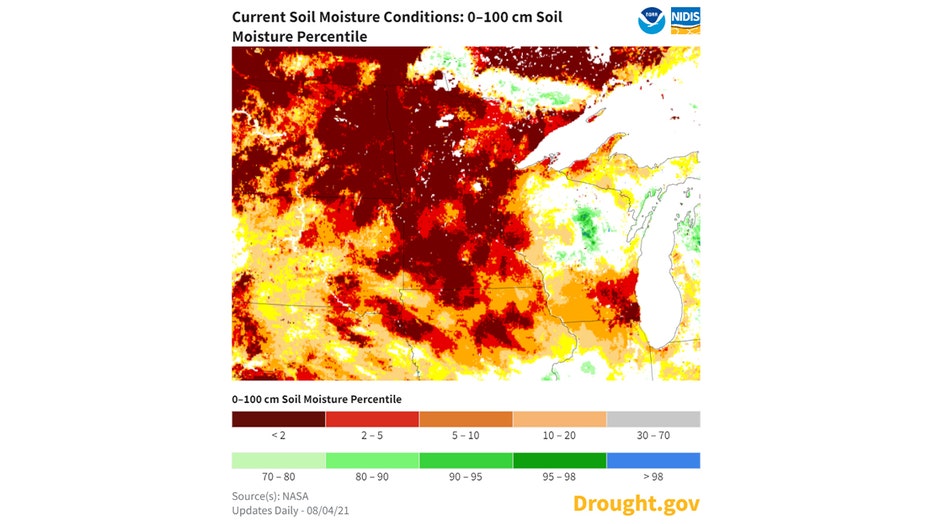 This map has the same colors (red is very dry and blue is very wet), but says a lot more about the current state of things. It shows us the percentile of our current soil moisture when comparing it to average. A lack of color indicates fairly "typical" levels of moisture. But Yellows, oranges, and reds indicate well below average soil moisture.

The entire western portion of Minnesota is currently experiencing a extreme or severe drought, in the middle of what has been a very dry summer. Since less than 2% of the state’s farm land is irrigated, farmers who are very reliant on Mother Nature, have been let down.

Clearly our soils are dry, but the deep reds indicate that at least half of the state is experiencing soil moisture at our below the 2nd percentile and in record low territory. That’s phenomenally dry. There isn’t a single spot across the state that is above the 10th percentile for soil moisture today. Even during our last major drought in 2012 and 2013, soil moisture wasn’t this low. That means it’s been at least 30 years since we’ve seen soil moisture levels this low.

READ NEXT: Drought causes some Minnesota farmers to harvest early

Thursday won’t provide any relief in most areas, but there is some hope on the horizon. An upper level low is likely to slowly move through the Upper Midwest over the weekend which could give us multiple opportunities for rain. It won’t be drought busting, but some relief will be possible.