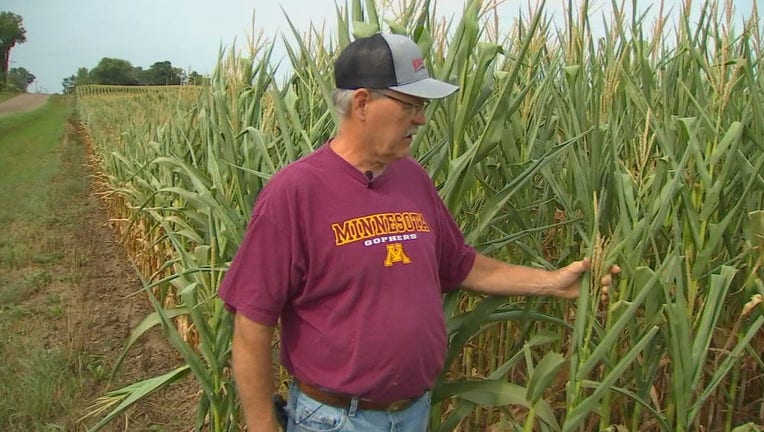 Washington County District 1 Commissioner and farmer Fran Miron inspects his crops amid the drought of 2021.

HUGO, Minn. (FOX 9) - The entire western portion of Minnesota is currently experiencing a extreme or severe drought, in the middle of what has been a very dry summer. Since less than 2% of the state’s farm land is irrigated, farmers who are very reliant on Mother Nature, have been let down.

On Wednesday at FarmFest, Gov. Tim Walz called it a "once-in-a-50-year" drought, saying he supports a drought aid package for Minnesota’s farmers.

Nora, a 15-year-old Great Dane, didn’t get along with other dogs so her owner, Deb Kuehl stopped fostering. But when she finally agreed to take in 20-year-old Gertie, Nora fell in love.

"Normally we would expect this corn to be 8 to 9 feet tall," Washington County District 1 Commissioner and farmer Fran Miron told FOX 9.

2021 has been anything but a normal year on the Miron Farm.

"There’s a lot of stalks that are barren here throughout this field," Miron said.

The fourth-generation farmer says his land has received less than three inches of rain since crops were planted on the 700 acres in Hugo.

"Very, very dry," Miron said. "And of course that creates a lot of stress."

While farmers normally harvest in September, Miron plans to begin next week, because his crop is dried out, and its growth has been stunted.

"When you see leaves that are curled and shriveled and dried up and brittle like that they break," Miron said. "There’s very little moisture in those leaves right now."

What he’s talking about is not hard to see, up close or from a distance, and the trouble doesn’t end there.

"When we harvest there likely will be higher nitrates, which can be poisonous to the dairy cows," Miron said.

That means they’ll have to chop the corn two feet off the ground, avoiding the bulk of the nitrates at the base of the plant.

"We’re going to end up leaving even more tonnage out in the field than what we normally would," Miron said. "And it’s a dry year."

That means the fields won’t provide nearly enough to feed his livestock.

"We’re looking at 50% on our corn crop from what we normally would expect," Miron said. "I’ve already filed a claim with our crop insurance."

Whereas Miron usually sells an excess yield, this year they’ve had to haul in food for their cattle from other parts of the state. Already, he’s sold off about 10% of his herd, because they’ve just been unable to feed them.

Meanwhile, the DNR is opening up some state lands to allow grazing for ranchers currently low on feed for their livestock because of the weather.