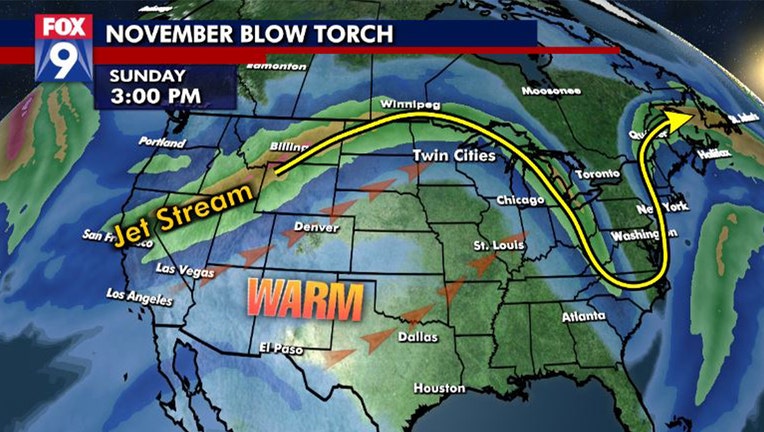 (FOX 9) - After a seasonably cool couple of days here in Minnesota, another big warm up is on the way courtesy of what I call, the blow torch effect.

Breezes will turn out of the south and southwest starting Thursday and kick into high gear on Friday. Those aren't just surface level winds, but southerly flow at just about every layer of the atmosphere. That will push the jet stream much farther north into Canada setting up a bubble of warmth across much of the central and western United States. I call it a blow torch because the above average temps literally get blown northeastward across the country, starting in the Desert Southwest, and pushing eastward over time as seen in the tweet below.

That timelapse above comes from the National Digital Forecast Database, or NDFD. That's a product from the National Weather Service that essentially averages the forecast from dozens of computer models from a host of different countries. It helps forecasters see the consensus of what is expected the next few days. Then, as a forecaster, you can look at individual computer models to determine some of the minutia that go along with our overall pattern. For example, here is a look at what one of the computer models shows for temperatures when compared to average over the next 10 days.

Upcoming warm up across North America

Another way to look at our upcoming warm up across North America. As it stands now, looks like a solid week or more of above average temps across much of the central and northern parts of the continent. Maybe a shift coming by next weekend, but that's a LONG way off.

A similar picture is emerging on the individual models themselves, which makes sense. Notice that there are some differences in just how far above average different parts of the country will be. This is quite common considering the NDFD is essentially the average of them all.

While record highs likely won't fall over the weekend--they are still in the 70s this time of the year--very mild temperatures are looking quite likely. The big question remains, just how warm can we get? We will be fine tuning that answer as we move forward.