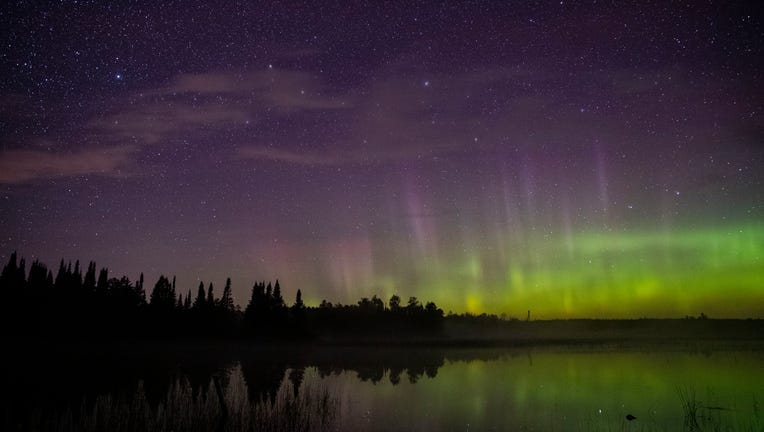 CLOQUET, MN - SEPT. 28: The aurora borealis could be seen on the North horizon in the night sky over Wolf Lake in the Cloquet State Forest in Minnesota around midnight on Saturday morning. The KP index was high in the early morning hours of Saturday (Alex Kormann/Star Tribune via Getty Images / Getty Images)

(FOX 9) - The northern lights may be visible to the northern tier of the United States Thursday night. But unfortunately for Minnesotans, it will likely be too cloudy to see them.

The aurora borealis, also known as the northern lights, appears when large amounts of solar particles come in contact with the Earth’s invisible magnetic field. These solar storms are produced by the sun all the time, but don’t always head toward Earth. They vary in intensity and don’t always lead to the visibility of the aurora this far south.

The sun goes through cycles of activity that are roughly 11 years in length. And we are headed into the more active period of its 11-year cycle. This means that if we don’t see them this time around, there will quite likely be more opportunities in the near future.

If you want to try to see them Thursday night anyway, best viewing will be well away from city lights looking to the north anywhere from around midnight to the very early morning hours. But, timing can certainly vary depending on when the solar storm arrives.